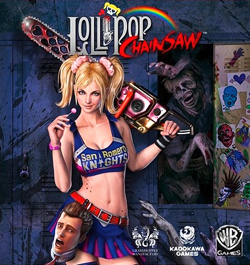 Played on: PS3
Played for: 5 hours to clear the campaign on the default settings and another hour or two achievement farming.

The students of San Romero High have been turned in to zombies and it’s up to cheerleader Juliet Starling to put the undead out of their misery in SUDA 51’s zombie beat-em-up for the Xbox 360 and PS3, Lollipop Chainsaw. With a short campaign, questionable humor and a slightly simplistic combat system, is it worth the purchase or should you head over to a Redbox and give it a rental instead? Let’s find out.

Rewind, if you will, back to the glory days of the arcade. Do you remember taking your $5 bill up to the change machine, stuffing the handful of tokens in your pocket and pumping one after another in to your favorite cabinet until there was nothing left but a few balls of lint? Imagine reliving that experience with Bruce Campbell as your player 2 and Toni Basil’s “Mickey” blasting in the background.. Yeah.. that orgasmic feeling you’re getting right now? That’s Lollipop Chainsaw.

Lollipop centers around San Romero High cheerleader Juliet Starling and her boyfriend Nick. It’s her eighteenth birthday and she heads off to the park to meet Nick and introduce him to her parents for the first time, but Nick ends up being bitten while saving Juliet from a zombie. Juliet, being the overly affectionate girlfriend that she is, removes his head “with magic” and proceeds to carry him around on her belt for the remainder of the game to eye up her skirt and provide comic relief.

The absurd banter between the two is generally hilarious, with Juliet playing the ditsy cheerleader and Nick being the overly-sarcastic voice of reason. The voice acting is cheesy and that’s the point. Lollipop Chainsaw never takes itself seriously and really feels like a great port of your favorite B-movies if they reproduced with the cast of My Little Pony and injected themselves with bull shark testosterone and the “rage” virus from 28 Days Later. The dialogue is always over the top and my girlfriend and I would periodically look at each other with that “did they really just say that?” look, but it’s not like that’s a bad thing. We’re both mature adults with a fondness for campy films and zombies, so we knew exactly what we were getting ourselves in to. Sometimes the jokes were hilarious and sometimes they missed the mark, but more often than not my inner 10-year old would chuckle as a zombie teacher threatens to give Juliet a C- or another makes a comment about Juliet’s breasts before exploding in to pieces.

Moving in another direction, combat is pretty simple in Lollipop using your pom-pom attacks to weaken the enemies before switching to your chainsaw attacks to decapitate them. While this might sound pretty basic, mashing buttons will only get you killed on anything above the easy difficulty setting. Juliet can easily become overwhelmed, and without the ability to block, she has to rely on quick dodge reflexes to avoid incoming attacks and leap-frog over the hordes to gain a better attacking position.

Killing enemies fills up Juliet’s sparkle meter that, when triggered, allows you to enter a “sparkle mode” to the tune of Toni Basil’s “Mickey” blaring in the background. Forget the fact that you can instantly decapitate weaker enemies in sparkle mode to wrack up coins because the only reason you need to fill it is to mow down zombies to Mickey over and over again. Think the Devil Trigger in the Devil May Cry series, but Juliet is a bit easier on the eyes and “Mickey” is a timeless classic.

Killing the turned citizens of San Romero rewards Juliet with coins which can be used at various kiosks to purchase physical upgrades like health and damage, better combo moves, additional costumes, concept art and background music. The amount of unlockables and upgrades significantly adds to the replay value of Lollipop Chainsaw, which is good considering the campaign only lasts around 5-6 hours.

The highlight of the combat comes in the form of some of the most outlandish, flamboyant boss fights in the history of beat-em-up gaming. One boss, Zed, screams through a microphone and throws his words at Juliet while another starts as a rockabilly star on a flaming motorcycle but ends up as a giant robot elephant that rollerblades around the room with a chain gun. All of the drugs in the world couldn’t make that up. It’s brilliantly executed and satisfying to play with no boss ever coming across as cheap. Just like in the old days, you learn the patterns and you exploit them, except now you cut them to pieces as a half-naked cheerleader with a head on her belt.

Lollipop consists of a tutorial level, 5 chapters and the final boss fight. Each chapter lasts around an hour and generally consists of beating the crap out of zombies, collecting stuff and completing a few quick-time events. Usually you’ll find yourself at a dead end that opens up after you’ve killed a certain amount of zombies, but the monotony of the ordeal is broken up with various mini-games that can be hit or miss. For instance, Chapter 4 has a living Pong room where you have to lure zombies in to path of the giant ball bouncing around the room. Watching them get rolled over was fun, but shooting zombies in a baseball field while Nick’s head runs the bases was quite the opposite.

The zombie slaying soundtrack to Lollipop Chainsaw is very eclectic and worked really well for each of the chapters. I’m a huge fan of Mindless Self Indulgence and The Left Rights, so hearing Little Jimmy Urine’s voice as Zed, as well as his musical influence on the boss stages was awesome. His collaboration with SUDA 51 just makes sense as well, with both of them being completely off the wall artistically. Lollipop also includes tracks from Arch Enemy, Five Finger Death Punch, Children of Bodom, Skrillex & Dragonforce.

Overall, Lollipop Chainsaw is unlike any game I have ever played before and, most likely, will never play anything like it again. Its in your face, punk rock attitude is exactly what I’ve come to expect from SUDA 51 and his artistic absurdity is why I’ll always be excited for his releases. Lollipop managed to bring all of the great B-movie aspects from the bargain bin over to the gaming world flawlessly, with verious nods to zombie film icon George Romero and the Evil Dead series. The important thing to remember is that Lollipop Chainsaw is, at heart, a throwback to classic arcade beat-em-ups with a very campy style and ridiculous amounts of replay value. Sure, the campaign may only clock in around 5-6 hours, but there are worldwide leader boards for high-score addicts, tons of costumes to unlock, various upgrades to purchase and collectables to find by replaying the game over and over again. Sadly, it suffers from wonky camera in tight spaces, which has been a common trend as long as 3D gaming has been around. There were a few times where the camera just wouldn’t adjust back to a stable position and taking my finger off the dodge button to swing it back around with the right analog stick was just enough time to end up in an undead gang-bang. In the end, Lollipop Chainsaw is a special kind of game that will always have a home in my collection. It’s a game I can pick up 10 years from now and have just as much fun as I would today, just like Crazy Taxi, Contra or Mike Tyson’s Punch-Out did years ago.