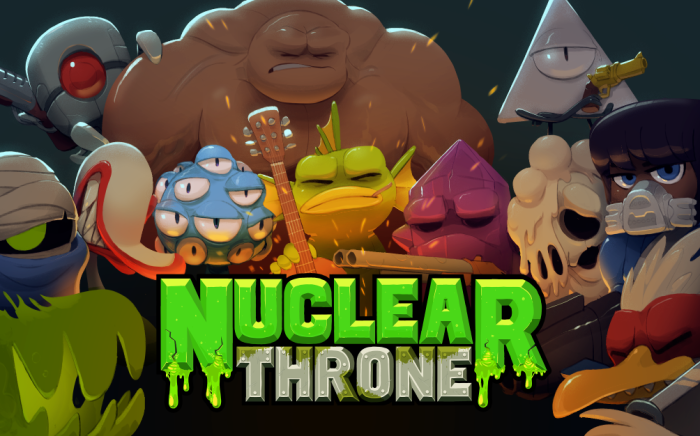 Pre-emptive Strike is a not-so-clever name for a “first impressions” post. Think of it as a review of the content I’ve experienced so far. Nothing more, nothing less!

Vlambeer’s twin-stick roguelike Nuclear Throne recently left Steam’s Early Access program and has finally arrived on the PS4 and Vita (with cross-buy, thankfully) after its confirmation way back at E3 2014. It’s a game I’ve followed in passing, mainly articles on major websites or a random livestream on Twitch, but as a fan of twin-sticks it was always a guaranteed purchase.

Now that I have my hands on it, was it worth the wait? Absolutely, but more-so on the PS4.

As mentioned above, Nuclear Throne is a top-down twin-stick roguelike shooter, meaning that when you die, you die for good. No matter what weapons you’ve picked up, which perks you’ve unlocked, what level you were on when you died, you’ll start back at square one each and every time. As is par for the course in the roguelike genre, levels are randomly generated so you’ll never play the same one twice.

I’ve always seen this feature as a blessing and a curse, as it ensures that every playthrough is completely fresh, but it also prevents its level design from sinking in and becoming a part of the game itself. It merely exists as a backdrop in exchange for giving the game infinite replay value (in a sense). Vlambeer does mix things up by changing the level theme every three stages, but without that feeling of familiarity I never truly felt immersed in their designs. I was just there to kill stuff, basically, and that’s pretty much the point of the game anyway.

Nuclear Throne is challenging, so I’ve yet to make it beyond its second world. The first three stages are desert themed, so there’s plenty of bandits, giant slugs, and cacti to shoot, with the second being a sewer. The pixel work is extremely solid, so it’s not as if I have anything against the game’s environments, I’m just not a huge fan of procedural generation (a major component of the roguelike genre).

Again, it’s a blessing and a curse to me; a double-edged sword.

I enjoy memorizing layouts and enemy patterns, but I can’t deny the rush of adrenaline Nuclear Throne provides when I’m low on health, bullets, and I have no idea where I’m going. I cautiously tip-toe around every corner, patiently waiting for gunfire to give away enemy locations, and eventually run out of bullets. It’s always the lack of bullets that get me.

The game offers over 120 different pieces of randomly dropped weaponry, from laser pistols and shotguns, to crossbows, wrenches, and screwdrivers. There’s a ton to pick up and experiment with, so maybe it’s time I leave my comfort zone and start toying around with a melee weapon in my sub-slot? I noticed certain gun combinations share bullets, like the revolver and the assault rifle, which isn’t the best idea. Like any other roguelike, it’s going to take a lot of trial-and-error/dying to get comfortable.

There seem to be a dozen characters to unlock, all of which offer some sort of unique special ability (sometimes at the cost of a severe handicap). Crystal seems to be the most beginner-friendly, starting off with a higher than average 10 hit-points. As their name implies, they also have the ability to shield themselves from damage by turning in to a giant crystal. Then there’s Melting, who only starts with 2 hit-points, but has the ability to explode corpses for some much-needed AoE damage. As you progress through the game (or die), additional characters are unlocked. Some require you to actually reach the fabled Nuclear Throne, so I won’t be seeing them for quite some time. 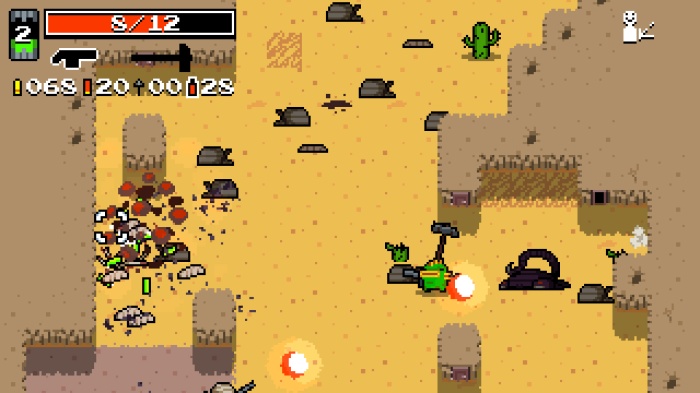 As far as action goes, Nuclear Throne offers it in spades. There’s always something trying to kill you, and you’re always trying to kill it first without running out of ammo (or dying) in the process. Collecting cash levels you up, and doing so lets you unlock one a random perk for the duration of your playthrough–homing arrows, bigger corpse explosions for Melting, increased health pool, and more. Aside from the usual arcade mode, there’s also daily and weekly challenges to sink your teeth in to.

It’s a simple concept with no story to get in the way, making Vlambeer’s sadistically addictive shooter a must-have on the Vita and one hell of a game to play on the road (or toilet, of course).

But remember earlier when I said it was better on PS4?

Personally, I find the Vita’s analog sticks to feel a bit too loose. They’re fine to use in other games, like Freedom Wars or Uncharted: Golden Abyss, but their sensitivity is hard to pinpoint in a twin-stick shooter. I find my accuracy to be far better on PS4, thanks to the superior analog design, and this in turn makes the Vita version feel significantly more difficult (to me, at least).

With the Vita’s right analog stick being so close to the face buttons, my sausage fingers have a hard time navigating back and forth (which is required here to pick-up and change between my two carried weapons). Thankfully most of the action takes place using only R and L, to shoot and activate the character’s special ability, but Nuclear Throne isn’t exactly calm. There are always bullets flying and things trying to eat your face meats, so fumbling in the process of picking up a new weapon while low on ammo, or swapping to a sub-weapon, has lead to a bit of dying.

Is it a deal breaker? Absolutely not. This isn’t Nuclear Throne’s fault, it’s just my fat thumbs in combination with the Vita’s layout. Someone on Twitter suggested remapping the face buttons to the rear touch-screens, so I’ll play around with it more tomorrow.

Even with my constant failures, I still found myself going back to die again, in hopes of making it just a little bit further. But given the choice to play it on Vita or PS4, I’ll always choose the PS4. For now it just feels better. I’m more than happy about paying $12 for both versions though–cross-buy is a wonderful thing, after all. It’s a great game with very little flaws on its own, but playing on the Vita is proving to be more of a challenge than I’d like.