Dungeon crawler RPGs cater to a niche crowd. They’re typically punishing, grind-heavy experiences with a strategic focus on party formations and class balance, which can understandably distance the casual or standard RPG audience.

Developer Experience Inc., whom you may know from the likes of Demon Gaze and Ray Gigant, have successfully checked all of the boxes for what makes Stranger of Sword City a DRPG. However, their game may unfortunately fail to remain engaging to anyone that isn’t a die-hard fan of the sub-genre. And at a hefty price tag, to boot.

Stranger of Sword City begins with a plane crash in a mysterious world, where your created hero is met by a peculiar woman adorned in a mix of anime sailor girl garb and medieval armor. It’s different, to say the least. She just so happens to be a member of the Strangers Guild, a group of folks who arrived in a similar fashion to the player, which possess the ability to defeat powerful boss monsters, called lineage types, and evolve their powers with a currency called blood crystals.

The story offers the player a choice between three different factions, or vessels, to offer these blood crystals, but I’m not sure how doing so alters the story. Stranger of Sword City had an interesting premise at the start — player survives crash, meets neat anime girl, possesses awesome new powers, and works with a group of strangers (in a literal sense) to find a way back home, though not everyone is on board. However, the narrative flattens immediately and unfortunately none of the characters evolve beyond their basic RPG tropes to keep the home fire burning.

Stranger of Sword City is heavy on the text, which is handy since all of the voice-over work is in Japanese with no option for English dialogue. It’s written in a way that comes off as descriptive, but gets to the point of things rather fast. The style of writing reminded me of a light fantasy novel, where the environments aren’t explained in great detail, but give just enough to let my imagination fill in the gaps.

The quality of the writing is generally good, so it wasn’t a matter of the game being overly verbose, I just didn’t find the story very interesting beyond the first two hours. Stranger of Sword City is a very meaty game, and I’ve yet to finish it, but in my time with the dungeon crawler I haven’t really moved beyond hunting lineage types and grinding my ass off to avoid frequently losing party members.

I’ve played a few dungeon crawlers in my time, namely the Etrain series and Persona Q, and I’ve always found enjoyment in their strategic combat mechanics and intense dungeon crawls. Weighing the risk of delving deeper to face increasingly difficult monsters and obtaining their superior loot drops, versus chancing a potential wipe and losing my hard-earned rewards, or worse, my party members, is heart-pounding.

Stranger of Sword City is no different, and I’m partially okay with that, but where Persona Q had a familiar cast of characters with genuinely entertaining back-and-forth segments in between dungeon crawls, Sword City misses that aspect entirely and relies on nothing more than its impressive visuals and class management combat system. It’s just a shame that the latter comes by way of intense grind sessions.

Grinding isn’t bad in moderation, but it’s never, ever how I want to spend a majority of my time in a game.

Stranger of Sword City offers a couple different ways to speed up the grinding, by way of consumable items that increase the rate of random encounters (though not by much), and eliminating all combat animations with the press of a button. Not having to sit through each individual attack is a welcome addition I wish more RPGs would implement, but an auto-battle option that allowed me to set modifiers for each class and just let them do their thing would have been even better. For instance, if the wizard identifies an enemy weakness to fire, they’d cast accordingly, or maybe my cleric could stop defending and heal when a party member is below 30% of their health pool. These are all things I can do manually, but it’d certainly make the grind far less exhausting. 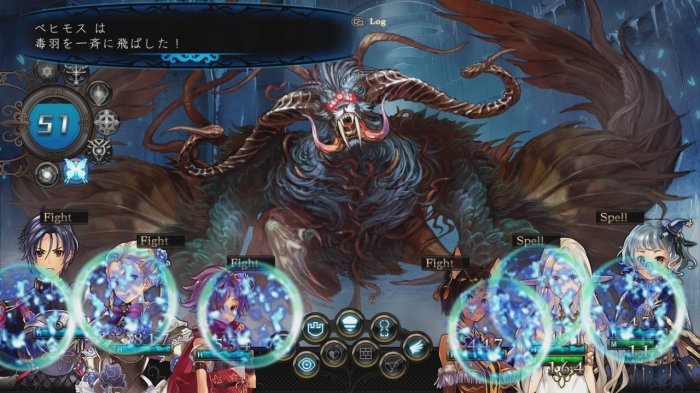 The character creation suite allows you to choose from a plethora of character portraits, from more western-themed armor-clad knights to dwarves, samurai, and scantly clad, large breasted women who’d no doubt be cleaved in half when their teeny bikini fails to mitigate any form of damage. Once your portrait is chosen, you’ll pick from a handful of typical fantasy classes, like fighter, cleric, and wizard (each with their own string of spells and abilities), allocate statistical upgrade points, and choose from a list of talents that give your party passive benefits, like improved defense, the ability to locate and disarm traps, or identify items.

Including your created hero, you’re allotted six party members — three that fight in the front row, and three from the back. It’s generally a good idea to fill the front row with classes that can take a beating, like fighter, samurai, and especially knight, with its ability to draw aggro and mitigate tons of damage. The back row is more suited for ranged damage dealers, like wizards, rangers, and dancers, or the invaluable cleric and their much needed curative spells.

Stranger of Sword City allows you to create a ton of extra party members to set on the back burner as well, who gain a percentage of your active party’s XP. This gave me the opportunity to play around with different class/talent builds, but also provided a Plan-B when my favorite party members took a dump in battle.

One of the aspects that make Stranger of Sword City so challenging is that each of your characters have a specific amount of life points — typically 2 or 3 — which is determined by their chosen age during the creation process. These life points dictate how many times a character can fall before vanishing forever. Younger characters are given more life points, but less points to allocate in to statistical upgrades (and vice versa for older characters).

When a party member falls, you have to return back to base camp and restore their life points, or hospitalize them for revival. Hospitalizing goes one step further, offering instant revival for a hefty, hefty currency cost (yay, more grinding!), or a free extended stay that requires your party to pass time slaying monsters out in the different labyrinths of Escario until they’re ready to fight again.

Losing party members is never fun, and makes every lineage type encounter a nail biter as you find out whether or not your hours of grinding was enough to overcome their steep odds. And if it isn’t, it’s back to your last save point.

To paint you a broader picture, I grinded for two hours and barely made it through the first boss encounter with only two of my characters still breathing. Having to go back to town, spend 20 minutes creating new characters, and farming random encounters while my preferred party members revived, wasn’t very enjoyable.

Overall, Stranger of Sword City is exactly what you’d expect from a dungeon crawler. It penalizes you tremendously for being under-leveled, under-geared, and ill prepared. It’s also extremely grindy (which clearly isn’t for everyone), and it somehow remains rewarding during its lackluster narrative.

I enjoyed hunting down different lineage types and using their blood crystals to unlock new abilities, but in a 40-50 hour journey I need a little more to hold my attention than a beautiful art style and the time-sink of grinding out levels for the sole purpose of not dying again.

I never managed to see Stranger of Sword City through to the end, but I reached a point where the game seemed to stop evolving and I was fine putting it aside in favor of something else. If you’re a hard-core fan of the dungeon crawling sub-genre, Sword City is unlike anything else on the Xbox One, but RPG fans have better (and far cheaper) options to choose from on the Vita.

*So where’s the final score? There isn’t one. I did spend a lot of time conveying my opinion in the above text, and I hope that’s worth more to you than some arbitrary number or a sequence of shaded-in star shapes. Basically, I’m not a fan of scores so I no longer use them. Read the review and judge for yourself if it’s worth playing.

Full disclosure: This review was done using a PlayStation Vita copy of Stranger of Sword City provided by the game’s publisher, NIS America. While I’m sometimes given games to review, I pride myself on providing unbiased reviews to fellow consumers and constructive feedback to hard working developers. Whether or not I pay for the game is irrelevant. Many screenshots used in my reviews are from Google’s image search, so it goes without saying that I deserve no credit for any of them.