Lately, I’ve been chipping away at the backlog, which mostly involved playing catch-up with the various Telltale games I’ve neglected. I’ve also been juggling whatever rental arrives from Gamefly while deciding that it’s definitely time I took a break from accepting review requests.

I love writing reviews — it’s my primary focus — but I don’t want to spend my entire summer break doing them. I’m fine accepting one here and there and squeezing it into my own personal adventures, but I’ve been bogged down with them since my spring semester ended in April. It’s my own fault, really. I received a handful of review keys almost in unison and I’ve been working my way through them ever since. Right now I’m in the middle of a meaty JRPG, with a visual novel on Vita to follow.

I just need a break. Not from reviewing games in general, mind you, but actively learning to say “no” and putting mental strain aside for the purpose of learning and “exposure.”

The notion hit me while playing through some older stuff I’ve had clogging up my physical shelves and various hard drives — games I had no intention of playing for the sole purpose of analysis and critique, but for fun. I still shared my impressions in bite-sized snippets on Twitter, and I’ve been reviewing games for so long that everything I play will likely be looked at with a critical eye. That’s fine, and it’s not to say I haven’t enjoyed the games I’ve been reviewing, but it definitely felt nice to be playing something for me. Something I picked out. 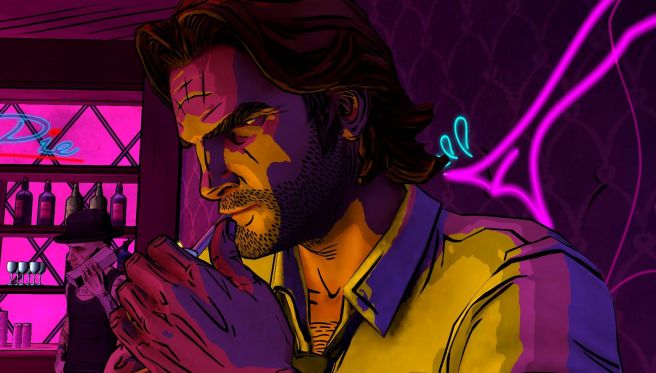 I finished The Wolf Among Us for the first time, which was pretty incredible. I loved its noir aesthetic and crime drama feel, the fleshed-out cast of familiar characters, and the way the storytelling changed my way of thinking about Bigby Wolf and how he’d handle a given situation. I’d still firmly state that Tales from the Borderlands is my favorite, but The Wolf Among Us is a close second.

This is noteworthy for being the first Xbox One title I finished this year, so high-five for that. 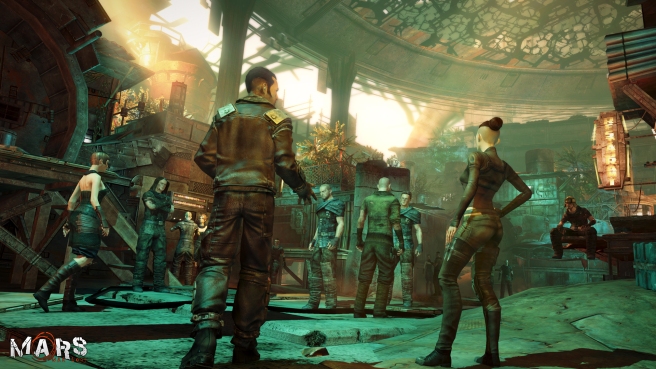 Afterwards, I took on an older Xbox 360 action RPG (by way of Xbox One’s backwards compatibility) called Mars: War Logs. Developed by Spiders Games (Bound by Flame, The Technomancer), Mars centers around a pair of prisoners who make a grand escape and are forced to live with the consequences of their choices made in-game. The combat is janky, the voiceovers aren’t much better, but there’s something special in there somewhere.

Spiders did a stellar job designing a world that resembled Total Recall if it were introduced to dangerous magic. The lower-class and prisoners are suffering, over-exposure to the sun and horrible experimentation has created a new breed of mutant slaves, and much of the working class has turned to gangs, drug use or prostitution to make ends meet.

Mars: War Logs felt like a game crafted around a series of novels, where there was clearly a ton of internalized lore at Spiders, but their smaller team and lack of proper funding clearly showed in the end — though not an entirely accurate comparison, imagine Mass Effect as a melee-focused game with a fraction of the budget and manpower, jammed into a 12-hour adventure.

The team put together some neat ideas, like scavenging for materials and using them to craft and customize weapons and armor, as well as three unique skill trees that focused on hand-to-hand combat, stealth and roguish trickery, and technomancy (lightning-based spells). Character models weren’t the greatest, but the world design sucked me in as a fan of dystopian sci-fi settings and I was always invested in the goings on of everyone around me.

After finishing up Mars: War Logs I wanted to spend more time in its world and learn more about the game’s lore, so I picked up The Technomancer during a Gamefly sale for about $5. It’s available on PS4 (which I purchased) and Xbox One and it takes place side-by-side with the events of Mars. It just arrived yesterday and I hope to put a few hours in over the weekend. 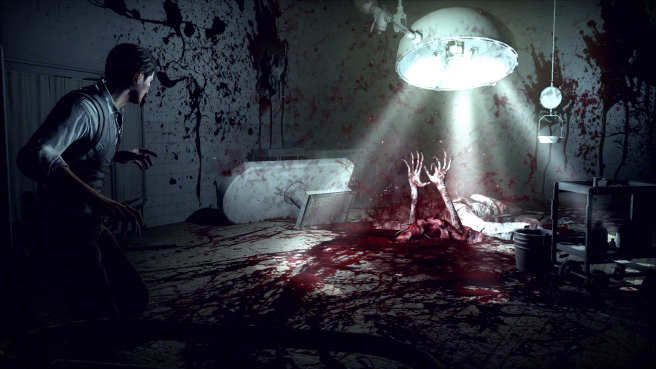 I jumped into The Evil Within afterward, since I was jonesing for a horror game and it’s been in my Xbox backlog since Halloween — along with all three DLC campaigns. The file size is also absurdly huge and I wanted to get it off of my hard drive to make room for Gears of War 4 (which is one of my current Gamefly rentals) and its equally absurd 90GB install.

My girlfriend and I had already watched someone play through the game in its entirety, so I wasn’t compelled to finish immediately and ended up shelving it again after chapter six. It’s an incredibly rad and visceral game that pulls no punches in the gore department, but a combination of the lack of surprise and stumbling into an unfortunate groove of never having enough ammo to deal with the quantity of monsters thrown my way kind of killed it for me. Not permanently, but I’m once again in no hurry to finish playing.

Oh, and instead of exiting out of the game I uninstalled it. So that sucked. Not even sure how that happened. 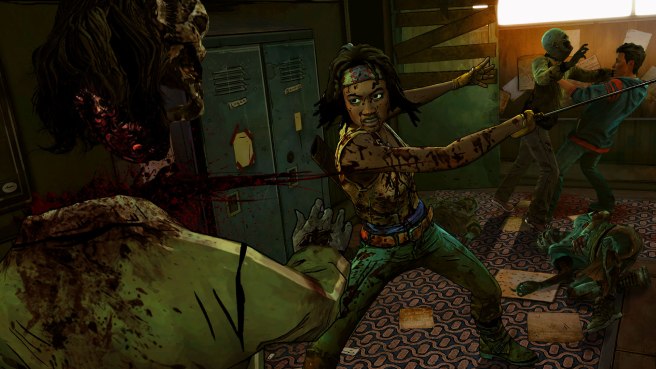 Xbox One is having a killer Telltale Games sale this week, so I picked up the third season of The Walking Dead: A New Frontier and The Walking Dead: Michonne mini-series. I won’t get to season three for a while, but with Michonne only being three one-hour episodes I worked my way through it on Wednesday in single go.

It was essentially every Walking Dead experience I’ve ever had crammed into three episodes, which didn’t really work. Telltale’s games excel at storytelling, and forcing character development and plot threads into three hours instead of ten didn’t allow Michonne to elicit much emotion.

The titular character from the comic and TV series is the only redeeming quality of the game, struggling to focus on survival while traumatized by the deaths of her two daughters. The rest of the cast, though, not so much. There are some crazy death scenes involving a cash register and a flare gun, but even that couldn’t save it from mediocrity. It’s not Back to the Future levels of bad, but it’s the second worst I’ve played.

My girlfriend recently finished Minecraft: Story Mode’s eight episode run and loved it, and although I’m not a big Minecraft fan she assured me that I’d enjoy it anyway. I’m currently in the middle of episode five and I can safely say it’s far better than it has any reason to be, particularly the male character’s delivery by Patton Oswalt. I’ll wait to give a full verdict until I finish the series, but before diving into Minecraft I took in a palate cleanser on the Xbox 360 in Beyond Good & Evil HD.

Beyond Good & Evil is one of those games I’ve heard so much about, I’m aware that everyone loves (despite nobody really buying it), yet I’ve never given it a shot — similar to Binary Domain and Mirror’s Edge. It was free during an old Games With Gold promotion and since I just renewed my subscription during a $1 return event I figured I’d give her a go.

I’ve only managed to play for a few hours, but from what I’ve gathered you play as a martial artist photographer named Jade who gets paid to photograph and document the various species that share the planet. Joined by her bipedal pig companion Pey’j, the duo work together to solve environmental puzzles, hang out with rasta polar bears, and repeatedly lose at air hockey to a shark named Francis.

It’s an action-adventure game with lots of colorful characters and mini-dungeon crawls, that also has surprisingly good combat mechanics. Jade has a dodge-roll, as well as basic combo and charge attack, but it’s pretty fluid and (thankfully) doesn’t feel very half-assed. I’m intrigued by the story and digging the early-2000s flare, but the camera controls during that era were fucking abysmal, weren’t they?

Right now, my priority is to finish up Minecraft: Story Mode’s remaining episodes and then immediately muscle through Gears of War 4 so I can return them to Gamefly. Beyond Good & Evil HD will serve as my “juggle game” between other projects, and I’ll continue chipping away at the PS4 JRPG I need to review.

What about you, folks? What are you getting into this weekend?

44 thoughts on “It’s the Freakin’ Weekend! What are You Playing?”