Last week, I mentioned that there wouldn’t be a Freakin’ Weekend post today because I was going out of town. Turns out that’s next week and I’m just really bad at reading a calendar. Next Wednesday I’ll be heading off to Maryland for a couple of days, then driving up to New Jersey, New York, and Pennsylvania for a much-needed vacation.

But hey, if someone out there wants to make a similar post in my absence, go for it!

After finishing off Beyond Good & Evil HD and Syberia, I moved on to Syberia 2. Although it released two years later, in 2004, the story takes place immediately following the original’s credits and contains all of the character and charm I’ve come to expect. This really is a fantastic series and it’s shaping up to be my favorite adventure game of all time.

Syberia 2 is supposedly shorter than the original, but I’ve been sharing the PC with my girlfriend since that’s her primary gaming platform. We picked up a bunch of stuff during the Steam Summer Sale, so she’s going through Kingdoms of Amalur: Reckoning and its respective DLC (one of her favorite games last-gen, but we no longer keep those consoles hooked up regularly).

Since she’ll be occupying the PC mostly, I’m juggling Syberia 2 with the Xbox One remaster of the first-person shooter/horror hybrid Metro 2033. I’ve heard a lot of great things about the series and I’m surprised I never played them back in 2010. I tend to enjoy single-player shooters and have a particular fondness for horror games, after all.

The game takes place in Russia twenty years after a nuclear war made the surface of Moscow uninhabitable. Everyone lives underground now in the old Metro, which is broken up into different territories and is home to heinous bandits and hideous monsters known as Dark Ones.

The story is based on a Dmitry Glukhovsky novel of the same name, where you play as the 20-year-old Artyom — the son of a prominent figure in his section of the Metro who happens to be immune to the Dark One’s affliction. You navigate the Metro fulfilling the last wish of a family friend, occasionally breaching the snow-covered surface, tip-toeing around bandit camps, and shooting up Dark Ones with upgradable weaponry.

It does a lot of things very well, particularly storytelling and atmosphere. The Metro certainly feels lived in and makeshift, while the surface appears abandoned by everyone but the Dark Ones for quite some time. With radiation playing a factor, Artyom has to manage his oxygen mask by collecting air filters, while also avoiding having it broken in combat. 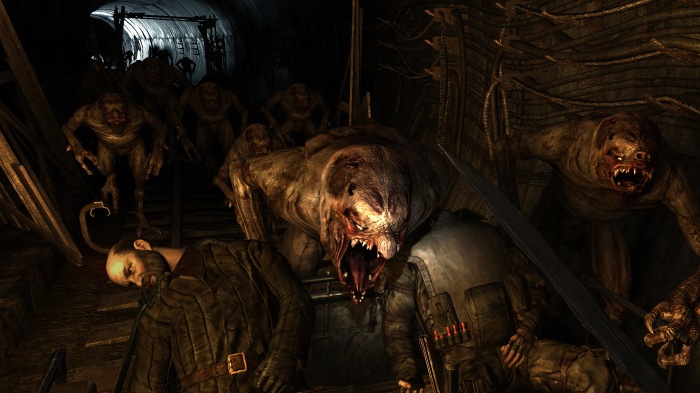 I’m roughly halfway through the game and mostly enjoying myself. There’s a chapter in the middle that takes you away from the horrors of the Dark Ones and places you into the horrors of what other humans are capable of, which was a bit dull by comparison.

It’s up in the air whether or not I’ll immediately jump into Metro: Last Light after finishing Metro: 2033. I usually like to take a break between sequels so I might take in a palate cleanser instead. I’ve been eyeing up Binary Domain, Crackdown, and Alpha Protocol lately, but that all largely depends on me not being lazy and hooking the Xbox 360 back up.

Otherwise, I may just continue chipping away at The Evil Within — the game’s motion blur gives me a headache after thirty minutes, but I’m determined to finish it up. I don’t want to start something particularly meaty, however, since I’ll be away from home for a week starting Wednesday.

What about you, folks? Have any gaming plans this weekend?

44 thoughts on “It’s the Freakin’ Weekend! What are You Playing?”