While Capcom is clearly uninterested in furthering the Mega Man franchise beyond console cycle re-releases and fighting game cameos, Inti Creates broke away from them in 1996 and have been steadily carving their niche in a similar genre by way of the Mega Man Zero & ZX series (and assisting Comcept with the development of Mighty No. 9, but shhhh!). If you’re a current Nintendo Switch owner, you’re probably familiar with their work on Blaster Master Zero as well.

Their latest release, however, isn’t entirely new. Azure Striker Gunvolt is a 2D action platformer that initially released in 2014 on the Nintendo 3DS, with an immediate sequel on the same platform in 2016. The Striker Pack itself, which contains both games and their respective updates on a single cartridge, also released on the 3DS during the fall of last year — which is essentially what you’re getting here on the Switch for $39.99 USD, in addition to its newly implemented HD visuals, 60fps gameplay, and rumble feedback.

While it’s easy to recommend the Striker Pack to fans of the Mega Man series, as both share a lot of common ground (dudes dressed in blue who choose from different boss stages and acquire new weapons and power-ups upon completion) and Capcom has shown little interest in bringing either of the Blue Bomber’s Legacy Collections to the Switch just yet, what about the rest of you?

In short, that’ll likely depend on your adoration for modernized “retro” titles that replicate the look of a bygone era while taking advantage of current hardware and quality of life changes — take Shovel Knight, Owlboy, Freedom Planet, or Axiom Verge, for instance. At the end of the day, though, it’s still a fancy port of two fantastic 3DS titles that are both definitely worth playing. However, if you’ve already milked them for all their worth on Nintendo’s clamshell handheld, there’s probably little reason to double dip unless you fancy yourself the collector type.

Azure Striker Gunvolt stars the titular hero in a world where random people are being born with inhuman powers, like harnessing the elements or soaring through the sky. With these adepts posing a potential danger someone had to police them, so the Sumeragi Corporation stepped in and kept the world at peace while secretly experimenting on them for their own personal gain.

As a member of the rebel group QUILL, Gunvolt is given an assassination job and happens upon a mysterious girl named Joule who can control other adepts by singing. So not only does Gunvolt have the ability to control lightning, but he’s now housing an incredibly powerful companion that is no doubt beneficial to the malicious Sumeragi Corporation.

Yeah, this game is anime as hell.

There are a lot of nicely drawn still shots and storyboard narrative moments throughout both games, and the story told is pretty good, but the core experience lies in their action. Similar to Mega Man, Gunvolt can shoot to the left and right while jumping and dashing across platforms. However, the purpose of his weapon is to merely “tag” enemies in order to fry them with his electrical Flashfield powers.

New weapons are acquired by defeating the game’s version of robot masters, which offer multi-directional charge shots and the ability to tag more enemies, but their focus never shifts away from a supporting role. The 2nd game in the series adds a new playable character with flashier traversal options, an actual gun for killing things, and an overall unique feel that brilliantly takes advantage of the sequel’s superior level design.

Gunvolt’s Flashfield acts as both an offensive and defensive mechanic, as well as a means of traversal. Holding the Flashfield button unleashes a homing jolt of electricity that zaps tagged targets to dust while also disintegrating bullets that cross into its protective bubble, but holding it while jumping slows Gunvolt’s descent and is essential to the game’s platforming segments.

Another crucial aspect of Flashfield is its Prevasion ability, which automatically phases Gunvolt out of harm’s way as long as the button is held down. Any use of Flashfield drains a meter that refills over time, or immediately by double-tapping down on the d-pad while not firing a weapon, so by smartly using Flashfield and Prevasion, along with keeping a close eye on its respective gauge to avoid overheating, you can essentially become invincible. 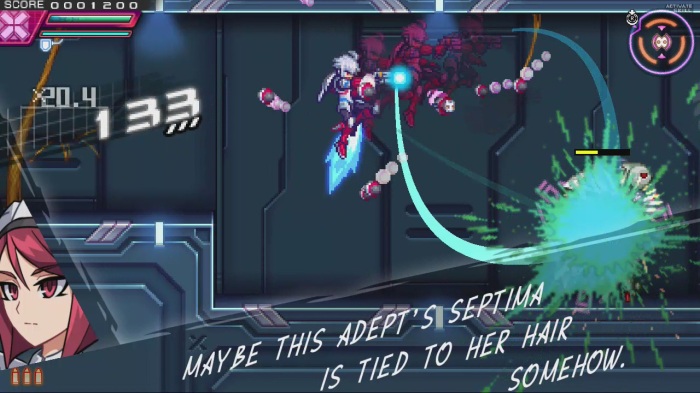 Skills are acquired throughout the game as well, which provide Gunvolt with high damaging attacks, healing spells, and other helpful “oh shit!” buttons that add another layer of depth to the combat. However, they’re a bit of a pain to use in the original game where the right stick is tilted in one of four directions to select an ability and is then pressed into the controller (R3) to activate. The Joy-Con’s analog sticks are a little finicky, so the slightest tilt while pressing in the stick typically chose a different ability by accident prior to activating. It’s frustrating, to say the least, but was a non-issue when using the Pro Controller. Gunvolt 2 thankfully uses the X button to activate skills, and while the original game does let you remap the controller, it doesn’t offer the ability to move the skill button away from R3. Grrrrr.

Between weapons, Flashfield, Prevasion, and skills, there’s a lot to keep track of in this pair of Azure Striker titles, including a basic level-up gimmick (kill things, get XP), a Kudos system (kill lots of things at once, avoid taking damage, and neglect checkpoints for higher scores and better rewards), and the ability to “synth” pieces of gear by collecting specific items (which grant new abilities, like double jumps and air-dashes). So while Azure Striker Gunvolt is clearly inspired by Mega Man, Inti Creates has put forth a lot of effort to evolve the classic’s iconic formula and provide the player with plenty of tools to finesse their way to the finish line.

The original Gunvolt builds a solid foundation with its myriad ideas and boss fights, but the sequel improves on just about everything. The levels are more meticulously designed to take advantage of both character’s unique traversal mechanics and stimulate exploration, though I found the boss encounters and the soundtrack to be more my style in the original.

It’s advised that you play through the original first to get a feel for the story and play style as the sequel does little to ease you in. Neither game is entirely challenging on their default setting, but if you’re unconfident in your 2D action platformer prowess the first title offers an easy mode that makes it nearly impossible to die outside of pitfalls. This mode is missing from the sequel, but maybe you’ll feel more self-assured after tackling the original first. Either way, both games are refined enough that anyone should be able to see them through with a little perseverance. There’s even a “true” ending to obtain if you’re up to the task.

Both Azure Striker Gunvolt titles are pretty fantastic 2D action platformers with great pixel art, catchy soundtracks, and engaging gameplay, and while I hate to keep bringing up its Mega Man similarities, it’s worth mentioning that the Striker Pack offers a familiar, praise-worthy experience that rarely suffers from an identity crisis. It does, however, suffer from an annoyingly small font within its menus that are a complete eyesore to read while playing in portable mode. This tends to happen when games are developed for the Switch that don’t take the resolution/size difference between your TV and on-screen display into consideration.

In the end, though, each game does just enough to distinguish itself from the other, and if you’re a fan of the 2D action platformer genre then it should be an easy sell at its respectable asking price. While the absence of Mega Man on the Nintendo Switch is a wound that’s unlikely to heal anytime soon, the Azure Striker Gunvolt: Striker Pack does a bit more than apply a band-aid.

So, where’s the final score? There isn’t one. I spent a lot of time conveying my opinion in the above text, and I hope that’s worth more to you than some arbitrary number or a sequence of shaded-in star shapes. Basically, I’m not a fan of scores so I no longer use them. Read the review and judge for yourself if the game is worth your time and money. I trust in your ability to make the right decision!

Full disclosure: This review was done using a digital Nintendo Switch copy provided by the game’s developer, Inti Creates. While I’m sometimes given games to critique, I pride myself on providing an unbiased review to fellow consumers, along with constructive feedback to hard working developers and publishers. Whether or not I pay for a game is irrelevant.