Episode Gladiolus pairs the endearing, Cup Noodle-loving oaf with Cor the Immortal shortly after getting beat down by Ravus at the end of chapter 6. Now unsure of his ability to protect Noctis as the Shield of the King, Gladiolus and Cor set off to a mysterious cave that serves as a proving ground of sorts for previous members of the Crownsguard.

Thus far, Cor has been the only person to make it out alive (hence “the Immortal” nickname) so he serves as Gladio’s Sherpa until the final showdown with Gilgamesh, the Blademaster.

I had a pretty great time with this episode for a multitude of reasons. I obviously have some clear bias, as I love Final Fantasy XV to death, but getting to play as Gladiolus (whereas Noctis is the only playable character throughout the core game) was quite a treat. 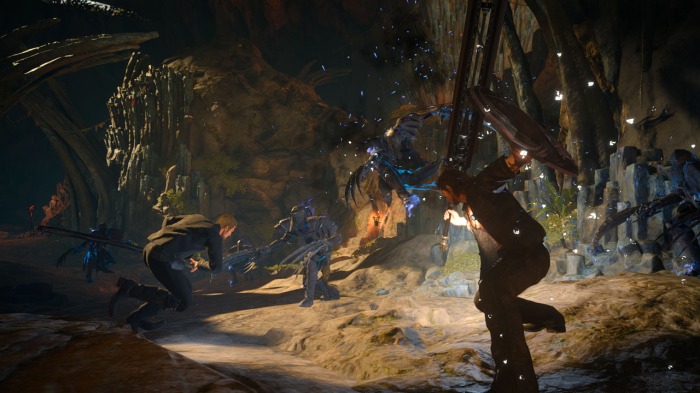 Square Enix really focused on making Gladio a warrior, favoring brute force and defensive tactics over Noct’s more nimble abilities that focused on avoidance and traversal. He can cleave and slash through enemies with his gigantic broadsword, and doing so fills a Valor meter that can be spent on devastating special attacks.

Gladio can also raise a shield to block incoming damage (or initiate a well-timed parry), which fills him with Rage and increases the power of his follow-up attacks by up to 4x. His Rage meter depletes naturally over time, in addition to each sword swing, and plays an important role when dealing with large crowds of monsters — drawing their attention while taking cover behind your shield to build Rage, and then unleashing the fury is quite satisfying.

I favored the broadsword during my Final Fantasy XV playthrough with Noctis, so Gladio’s shoes were a nice fit. I enjoyed his more grounded style of fighting, which rewards a well-mounted defense with brief moments of all-out aggression. He can even use his strength to rip stone pillars from the ground and smash through enemies like they were level 1 kobolds, which further played into the “warrior’s rage” motif Square was going for.

The narrative bits are of course broken up by large combat segments with various enemy types, culminating in a few stand-out boss battles that put Gladio’s combat mechanics to the test. One, in particular, pits the Shield of the King against a heavily armored bird creature that spews fire. Rather than simply blocking to build Rage and following up with successive attacks, Gladio has to lure the beast toward a few of the stone pillars I mentioned earlier in order to land a parry attack to inflict a stunning blow. While the creature slowly recovers, you can take full advantage of the opportunity by ripping a pillar from the ground and bludgeoning the fowl to bits.

The final duel against Gilgamesh, however, ended up being one of my favorite encounters in the entire game. The build up was great, in which Gilgamesh defeats Gladio at the start of the DLC and proceeds to taunt him the rest of the way as he inches closer to the Blademaster’s domain. And then, when Gladio has finally overcome the final trial and all that stands before him is Gilgamesh, he sees the bridge leading up to him lined with the weapons of the defeated — after all, only one other person has survived Gilgamesh’s wrath, and he’s not by your side for this fight.

But that’s not all.

In what’s sure to get long-time fans jumping from their seats, Keiichi Okabe of NieR fame went ahead and recreated the original Gilgamesh bridge battle theme from Final Fantasy V for this epic showdown. My heart rate skyrocketed the moment this track kicked in (here’s the original for comparison).

Keiichi Okabe also composed the DLC’s theme song, “Shield of the King,” which is absolutely brilliant. If this track doesn’t give you chills, you’re a monster.

The whole experience only lasts about an hour, with Gladio and Cor navigating a mostly linear cave and sharing personal stories along the way. Cor the Immortal was one of the characters I wanted to know more about in the core game, so getting to hear these brief snippets regarding his time spent in the same cave thirty years prior was pretty cool.

Unfortunately, the story told doesn’t do much in the way of fleshing out Gladio’s character beyond a short personal “test of strength” quest and giving the Shield of the King a little positive reinforcement. It’s still good, and worth playing for the combat and soundtrack alone, but I wish they would have gone more into Gladio’s story instead of focusing so much on Cor — it’s Episode Gladiolus, after all. Finishing the DLC awards you with a new broadsword back in the main game, though, and while it’s definitely one of the better-looking ones it’s a bit underwhelming in terms of power if you’ve already finished the story and began working on post-game content.

If you’re at all invested in Final Fantasy XV, Episode Gladiolus can be purchased on its own for $4.99 or bundled together in the game’s season pass for $24.99. There are some nice extras in the season pass, but this short and sweet adventure is worth every bit of its solitary asking price.