After about 5 or 6 hours with Mario + Rabbids: Kingdom Battle, fatigue began to set it. I was enjoying the combat, being a diet XCOM of sorts, but nothing else felt very rewarding. Exploring nooks and crannies typically awarded concept art and other uninteresting things to view in the in-game museum, rather than currency or weapons. Outside of the occasional Nintendo cameo, the story had nothing going for it as well.

My drive to continue playing degraded, eventually resorting to a single battle here and there before turning the Switch off in favor of something else.

I applaud Ubisoft for crafting a game that’s certainly better than just about anyone anticipated, not because it’s Ubisoft but rather it being a crossover with the chaos-loving rabbids. Grant Kirkhope’s composition was also phenomenal, and hearing Jungle Japes play during the Rabbid Kong battle was a nice trip down memory lane. However, I think I just need more in an RPG above fun combat, cameos, and a familiar aesthetic.

I ended up selling Mario + Rabbids on eBay for the same price I bought it for with my Best Buy GCU discount. I don’t regret my time with it and I’m glad I sated my curiosity, but I do wish it had a little more to chew on. Hopefully, it sells well and Nintendo continues letting proven developers take chances with their I.P. on the Switch. 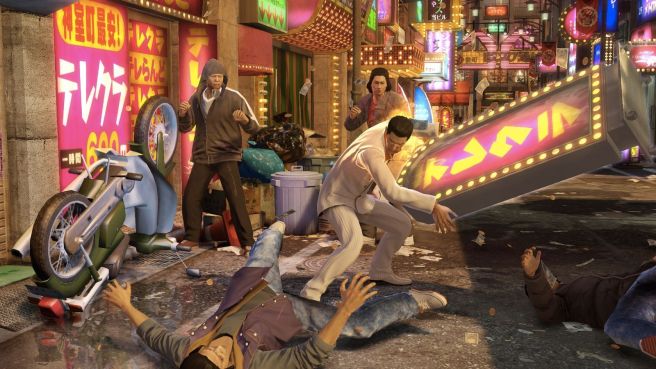 As my interest waned in the crossover, I jumped into Yakuza 0 on PS4. It’s an action-adventure series that’s been around since 2005 on PS2, but this is my first foray into the SEGA-developed crime drama. With Yakuza 0 being a 1988 prequel that released earlier this year, and the first two games in the series being remastered from the ground up in Yakuza Kiwami (the first of which just released, with the sequel coming next year), it seemed like the best time to take the plunge.

In the early portion of the game you play as Kiryu (with a 2nd character added later), a young Yakuza in the Dojima family who is framed for murder by one of his superiors eager for promotion. In an attempt to take over Kamurocho, Tokyo, the Yakuza and a mysterious real estate company compete for an empty lot in hopes of bundling it together with other properties and selling to the highest bidder. Should any member of the Yakuza obtain the deed to the lot, they’re guaranteed the second-in-command seat, which is currently held by Kiryu’s father figure who is one month away from serving out the remainder of his prison sentence.

There’s certainly a fair amount of drama going on and I’ve been pretty absorbed in Kiryu’s struggle to prove his innocence after being exiled from the Yakuza. The main story quest feels like a well-written television show, however, the side-quests bring out the quirkiness the series has become known for.

Yesterday, for instance, I found a stuffed marlin that shot grenades and broke away from the main quest to help train a shy dominatrix. I also came across a child whose new video game was just stolen by some young punk, who then got robbed by another punk, who then got robbed by a gangster that shot me twice for trying to get it back. In an odd turn of events, the gangster was the kid’s father who just wanted a copy of the game to give his kid and get back in his good graces. Weird stuff, I know.

Combat feels like a beat-em-up, where mashing square and ending combos with a heavy attack is good enough to take down most common enemies. You can pick up just about anything, from traffic cones to motorcycles, and use them as weapons. Grappled enemies can also be dragged toward objects in the environment and violently dispatched with contextual presses of triangle. You can unlock additional abilities with in-game currency or via special training quests, which expands the three available fighting styles exponentially.

I’ve played for about six hours so far and I’ve loved every minute of it. Last night I unlocked the 2nd playable character, Goro Majima, but I’m not quite sure how he fits into the story just yet since that’s where I left off. I definitely plan on playing more this weekend.

I also plan on jumping into the newly released Korean game White Day: A Labyrinth Named School. It’s a first-person survival horror title with randomized puzzle solutions, ghost stories, religious undertones, and a murderous janitor that stalks you around the campus. I’ve watched GG Gab play the first two hours and it looks pretty ruthless, but White Day also has that PS2-era horror vibe that I love so much.

Apparently, this is the 2nd or 3rd remake of the game, which initially released way back in 2001. I’m not quite sure what to expect.

Outside of playing games, I’ve been watching Cryaotic play through Clock Tower 3 on PS2. I remember loving the game when it came out in 2003, but I certainly don’t remember it being this insane.

It’s essentially a magical girl survival horror game with absurd puzzle solutions, campy acting, and silly murderers who chase you around different time periods. It’s exceedingly violent as well, doing away with the corny dialogue bits in favor of gore-fueled cutscenes where child prodigies are bludgeoned with giant hammers and people dissolve in barrels of acid. The chase scenes culminate in boss fights where a teenage girl uses a magical bow and arrow to tether them in place before delivering a Final Fantasy-esque summon spell that acts as a deathblow.

Cryaotic seems to be enjoying the absurdity of the game, which makes for a good Let’s Play.

I’ve also been watching GG Gab play through Silent Hill: Origins on PS2, which leads into the events of the original game. It’s an interesting game that lets you shift between the normal realm and the “otherworld” by touching mirrors, but I hate that Origins uses a disposable weapon system, in favor of the traditional permanent weapons found in previous games. Silent Hill 4: The Room did it first, sprinkling in things like golf clubs that broke over time, but also had permanent weapons like axes, lead pipes, and guns.

Yesterday I noticed Hungry Goriya had four episodes of their Psychic World Let’s Play on the Sega Master System, so that’s definitely on the agenda as well.

That aside, my girlfriend and I are headed out to see IT tonight. Someone described it as “Wes Craven directing The Goonies,” which excites me to no end as a huge fan of A Nightmare on Elm St and as someone who considers The Goonies their favorite movie of all time.

What about you, folks? Got any plans this weekend?

10 thoughts on “It’s the Freakin’ Weekend! So What are You Playing?”