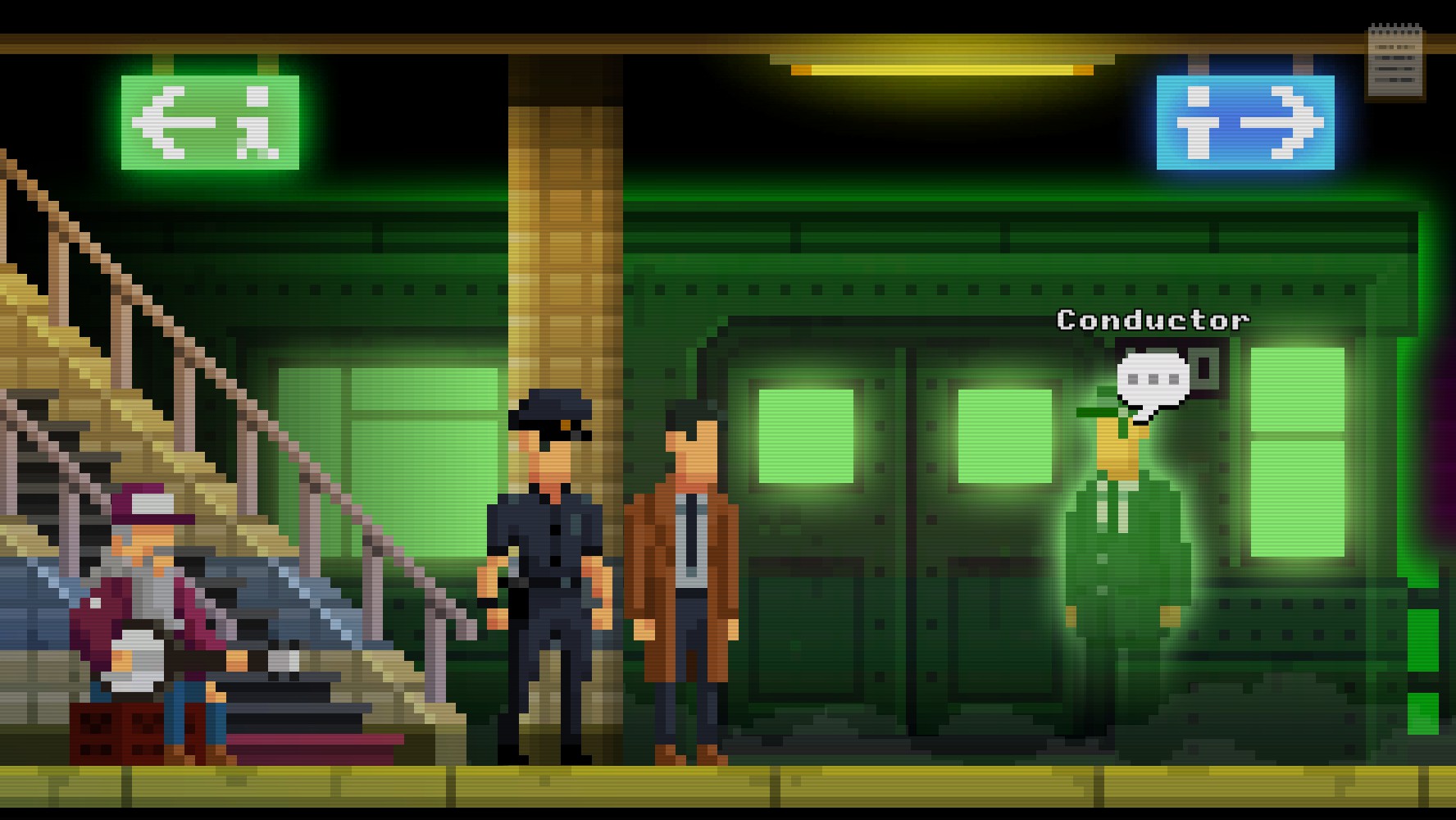 The Darkside Detective runs amok with familiar pop culture references, from Twin Peaks and Gremlins to IT and Ghostbusters, and places hard-boiled detective Francis McQueen amidst them in six slices of supernatural, point-and-click adventure. Each case is independent of the last and gradually expands in scope and size, but the gameplay remains largely the same throughout. These appetizer portions not only allow the game to run on limited screens and interactive objects but also dial back on the copious amounts of backtracking and inventory management found in larger, meatier adventure games.

This proved to be both a blessing and a curse, however. While I ultimately enjoyed Spooky Doorway’s method of framing each case individually, it certainly made for a short, simple adventure that relied a bit too heavily on pop culture jokes and not enough on drawing me into the world they created. Perhaps that’s the point, though? 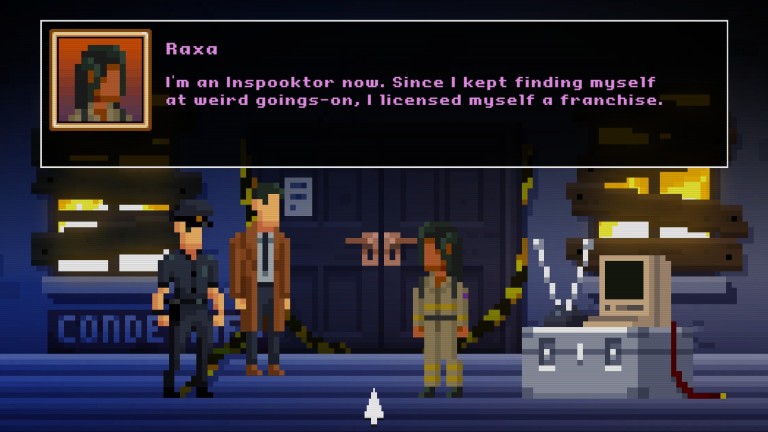 In typical point-and-click fashion, a majority of the game is spent exploring scenes, chatting up NPCs, and collecting useful items that’ll end up being used in various puzzle solutions that otherwise play gatekeeper to your overall progression. Other adventure games may have you wandering all over the deity of your choice’s creation, but with The Darkside Detective’s bite-sized episodes you’re instead limited to 10-ish screens to explore within them. Not having a lot of ground to cover made it easier to track down items, and, in turn, not having many items to choose from led to easier solutions. This is still wholeheartedly a point-and-click adventure game and the traditional gameplay is occasionally broken up by familiar mini-games, but it’s certainly one of the easiest I’ve ever played.

If a lack of challenge isn’t your thing, though, there’s still a bit to love here. 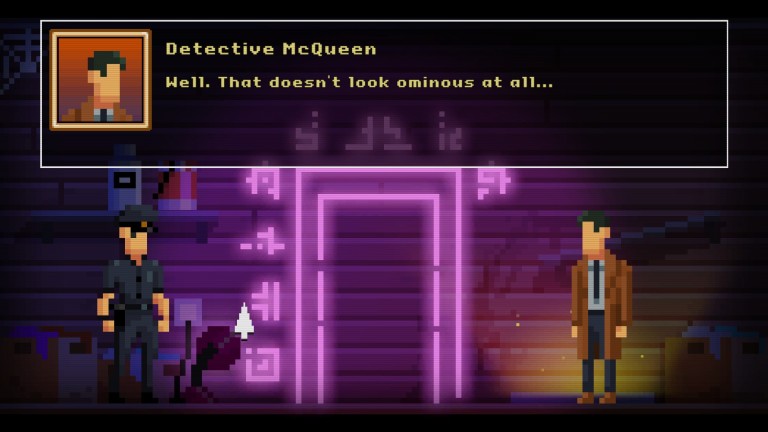 For starters, it’s genuinely funny — unless non-stop pop culture references aren’t your thing either. There were moments when I found myself chuckling aloud, particularly in a case where my partner Dooley purchased an urn as a retirement gift, which (of course) released gremlins into the police station. Other cases had me look for ghosts using an old Viewfinder toy, flushing keys between bathroom stalls a la Day of the Tentacle (complete with purple tentacle!), and taking down mafia spectres by toppling a water tower blessed by a priest who just so happened to be an extreme sports enthusiast.

Not all of the pop culture references stuck their landing, though. For example, one case took place in a haunted library (yay, Ghostbusters). Over in the horror section stood the ghosts of Edgar Allan Poe and H.P. Lovecraft arguing over who wrote the scarier stuff, which was right up my alley, but their argument was settled when they both agreed Twilight was worse (or at least a fictional jab at Twilight about reverse vampires, called Guylight).

Since I was never really stumped on any of the puzzle solutions, I was granted a bit more wiggle room to admire the pixels and keep an eye out for more “haha” gags. Detective McQueen often breaks the fourth wall and the game as a whole is full of self-aware adventure game jokes, which are always fun, and the overall light-hearted nature of the three-hour adventure definitely played to its “elementary adventure” feel.

However, as someone who has been around the block with these types of games I was a bit let down by its severe lack of challenge. With very little original material to latch onto (since most of the dialogue, scenarios, and gags were based on pop culture jokes we’ve all seen hundreds of times before), I don’t think I would have been interested in spending more than the three-or-so hours it took me to finish up the game’s six cases.

The Darkside Detective presents an endearing and chunky pixel aesthetic that catered to my nostalgia while providing enough clarity that essentially removed the need to “pixel hunt” around the environment. Its bite-sized scenarios never allowed the familiar humor and “good enough” dialogue to overstay their welcome, but if you aren’t amused by pop culture jokes and find The Darkside Detective’s severe lack of challenge unappealing, you may want to click elsewhere.

It’s a good time in comparison to its asking price, but definitely not an adventure for every point-and-click fan.

So, where’s the final score? There isn’t one. I spent a lot of time conveying my opinion in the above text, and I hope that’s worth more to you than some arbitrary number or a sequence of shaded-in star shapes. Basically, I’m not a fan of scores so I no longer use them. Read the review and judge for yourself if the game is worth your time and money. I trust in your ability to make the right decision!

Full disclosure: This review was done using a Steam key provided by the game’s developer, Spooky Doorway. While I’m sometimes given games to critique, I pride myself on providing an unbiased review to fellow consumers, along with constructive feedback to hard working developers and publishers. Whether or not I pay for a game is irrelevant.

9 thoughts on “[REVIEW] The Darkside Detective”