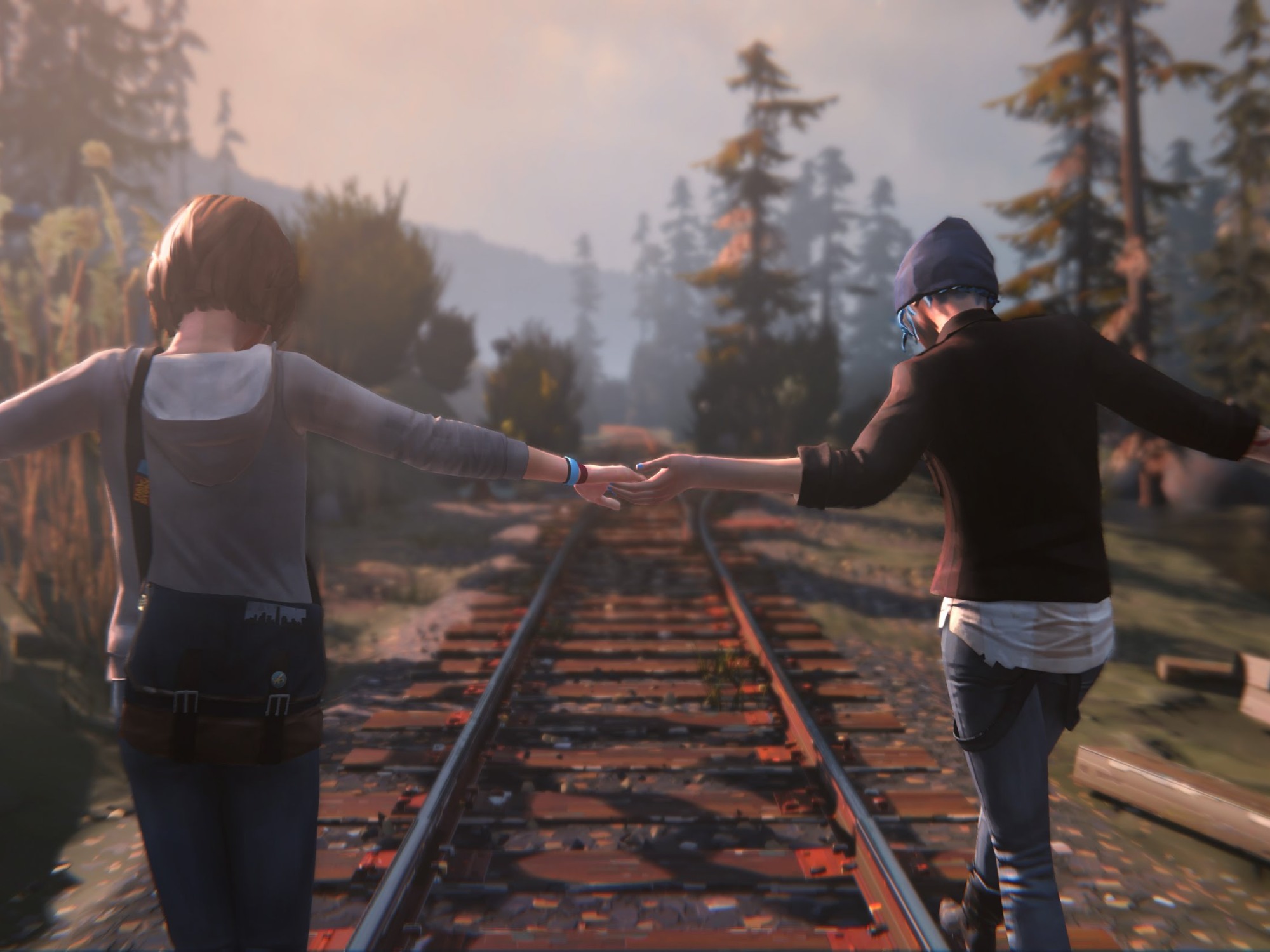 Although I’m still chipping away at The Legend of Zelda: Twilight Princess HD (and mostly enjoying it) I’ve been breaking it up with other games in my backlog.

One of my favorite games of 2015 was Dontnod’s adventure series Life is Strange, where a young photography student and her BFF embark on a time-bending emotional rollercoaster to solve a missing persons case. A prequel released last year that I never got around to, entitled Before the Storm. Rather than focusing on Max, the prequel stars her best friend (science-nerd-turned-punk-rocker) Chloe Price and builds upon her relationship with Rachel Amber; the aforementioned missing person. I played through the three-episode series over the last two days and thought it was excellent. Chloe wasn’t my favorite character in Life is Strange, mostly due to her edgelord “fuck everything” attitude, but Before the Storm does a great job at showing the player why she turned out the way she did — along with the birth of “hella,” her blue hair, the tattoos, and more. Going into Before the Storm, I knew that her new friend Rachel Amber would eventually end up missing before the events of the original game, but these episodes served to draw the player into their strong bond and empathize with Chloe’s so-called irrationality in hindsight.

Being a teenager was weird, as I’m sure you recall, and controlling Chloe while she endures her life’s unwelcome challenges (coping with the death of her father, her childhood best friend moving away, drug use, puberty, sexuality, bullying, unwanted attention, choice and consequences, and living in a broken home) was a constant reminder of how much high school sucked for me.

She couldn’t rewind time like Max, but instead used her silver tongue to argue her way around dialogue choices. She also suffers recurring dreams of her dad’s car accident, which she describes as feeling all too real. These were some of the best moments as they peered into her pre-punk life and were constant reminders of why she resented her mother’s decision to begin dating her eventual “stepdouche.”

Chloe is viewed as a delinquent by everyone but Rachel, so watching their relationship unfold was truly something special. One scenario, in particular, drags the antisocial (and newly expelled) Chloe back to Blackwell to perform in a production of The Tempest. Chloe reluctantly fills in for a no-show and you can immediately watch their bond grow in front of the people she loathes the most: her former fellow students.

Another great moment comes early in the game’s first episode, where you can agree to join in on a D&D campaign with two of Chloe’s friends. With Before the Storm being an adventure game, you can blow this off entirely, but for those of you wanting to slay orcs and roll for initiative, there are a good 30 minutes of in-game role-playing to be had as Calamastia, the Elf Barbarian. Had I played Before the Storm last year, this moment would have ranked up there with Mass Effect: Andromeda’s “Movie Night” as my favorite.

I was hooked every step of the way and the after-credits scene in the final episode was just so incredibly haunting.

I’ve also been dabbling in the futuristic soulslike, The Surge. I think it has a great look and a really impactful opening scene where the wheelchair-bound protagonist is assumed to have been given anesthesia prior to prosthetic surgery (of course he wasn’t), but I’m not too wild about the gameplay or its underlying mechanics thus far. Combat is methodical and has some weight to it, but targetting limbs to acquire upgrade materials just has me revisiting medbays to reset enemy encounters instead of exploring. I’d rather just obtain gear instead of crafting it from scratch, and then using the medbay to upgrade things. I’m also finding it easy to get lost within the environment since everything looks the same (desolate robot wasteland full of dirt and machinery, and uninspired indoor sections have littered my first 3 hours). I’m hoping it’ll suck me in, but right now I’m not very eager to go back.

I was digging through my PS4’s digital backlog in search of shorter experiences to break up Twilight Princess and ended up installing the original Life is Strange. With Before the Storm fresh in my mind, it feels like a good time to revisit one of my favorite adventure games and see how everything connects between the two. And since I’ve already played it before, I’d be in no hurry to finish it up.

I also installed Moon Hunters, which is a short, co-op action RPG that developer Jeux Kitfox referred to as a “personality test RPG.” I have no idea what to expect, other than it was initially praised for its writing, music, and atmosphere, but criticised for its short duration and providing less enjoyment for solo players. I’m not sure how long (or if) I’ll stick around, but it’s been sitting in my download folder for months. Why not, right? The anime-based visual novel Psycho-Pass: Mandatory Happiness was given away as an incentive for subscribing to PlayStation Plus. I like jumping into a good visual novel when I’m not in the mood for sword swinging or spell flinging. I’ve really enjoyed them more in the last few years, especially the likes of Hakuoki: Kyoto Winds, Root Letter, and Amnesia: Memories, and I’m sure Psycho-Pass will provide a nice break at some point. Though, I’m wondering if I should brush up on the anime first?

Most of the games in my backlog right now are RPGs: I am Setsuna, Pier Solar and the Great Architects, Ys VIII: Lacrimosa of Dana (which just received its translation overhaul patch on January 30th), Final Fantasy VII, and Final Fantasy IX. I also have Danganronpa 1+2 Reload and Ultra Despair Girls: Danganronpa Another Episode at the ready, along with visual novel/basketball hybrid Pyre and Runic Games’ (RIP) puzzle platformer Hob.

As for what I’ll get into this weekend, it’s looking like I’ll be revisiting Life is Strange and checking out Moon Hunters between one-hour bursts of Twilight Princess HD. I don’t want to get sucked into anything too big right now because I want to be available on February 6th when the Shadow of the Colossus remake launches. After that, I’m looking forward to finally playing one of the Nintendo DS’s most beloved RPGs for the first time in Radiant Historia: Perfect Chronology (its 3DS remake). I’m itching for a good RPG and Lost Sphear’s lukewarm reception led me to wait for Radiant Historia instead.

What about you, folks? Got any gaming plans this weekend?

55 thoughts on “It’s the Freakin’ Weekend! So What are You Playing?”