Back in 2016, the 10-man development team at Sushee announced that they’d be crowdfunding a new entry in the Fear Effect series after being given the green light by Square Enix. Unlike the two third-person action-adventure games back on the PlayStation, which featured cel-shaded graphics and risque advertisements (because lesbians), this new venture was inspired by the likes of Shadowrun Returns and never sought to become a true AAA sequel. Instead, Sushee wanted to take the series in an entirely new direction that supported their budget, while still retaining the now 17-year-dormant Fear Effect’s notable visual flair and its cast of characters.

The end result, unfortunately, is an absolute mess. It’s worth noting at this point in the review that I gave the game a good four hours of my time and was so turned off by the entire experience that I threw in the towel. That’s basically a review in itself, but if you don’t value my opinion because I didn’t see the credits, I totally understand. However, I don’t think you “need” to finish anything to know what a bad game is. 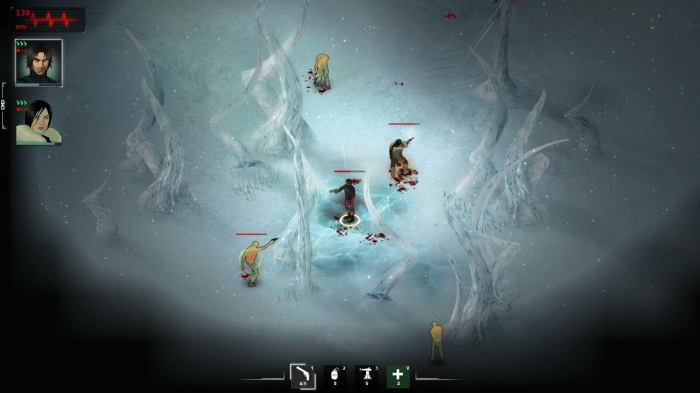 At its core, Fear Effect: Sedna is an isometric twin-stick shooter with clunky combat mechanics, a useless pause-and-plan tactical mode, “gotcha!” deaths, and mostly out-of-place and unenjoyable puzzles. It still retains the series’ neon-soaked cyberpunk aesthetic within cutscenes, but the isometric layout is routinely generic and uninspired.

The story is mostly a popcorn action movie, with Fear Effect’s ensemble cast of anti-hero mercenaries taking on a heist job to steal a piece of art. Things go south and they end up exploring underwater facilities, bunkers, offices, and other drab environments before the more interesting scenarios arrive that are inspired by Inuit mythology.

On the graphical front, it’s not what I’d call an eyesore during cutscenes. Sedna does an admirable job at staying true to the original series’ character designs, particularly Hana and her hacker girlfriend Rain. It’s important to remember that Sushee is a small team, not Square Enix, and what’s presented is serviceable enough. The same can’t be said about the actual gameplay, though.

The more zoomed-out isometric approach during gameplay feels like it had only been given a brief glance during the development process. Environments are by-the-numbers displays that portray themselves as asset dumps, wherein everything looks exactly the same. There’s no life in these level designs; just overly squared off objects plopped into buildings and buried under a black “fog of war.”

Fear Effect: Sedna’s worst offender is definitely the combat system. It’s a twin-stick shooter that feels bogged down and clunky, where you move with the left analog while aiming with the right. A shoulder button is used to fire off standard bullets, you can dodge roll and reload with the face buttons, and duck behind cover by clicking in an analog stick. You can switch between a given mission’s available characters with L and R, each offering up their own unique special attack. This sounds like standard fare, but its execution is absolutely abysmal.

For starters, the enemy and partner AI is brain-dead. Enemies often flock to you while you mow them down with standard attacks, but typically target only one of your party members. If you duck behind cover and pop out to shoot, you won’t immediately take safety without clicking in the analog stick again — which already feels awkward. There were many instances where my partners would run in to shoot the bad guys at close to melee range, not even reacting to the fact that they’re getting peppered with bullets in the meantime. The game provides a plethora of medkits, which are shared between the party, and most of mine went to healing up my teammates after their dumb mistakes.

Sedna’s twin-stick combat includes a pause-and-play tactical mode that allows you to freeze the action, issue commands to each of your teammates, and watch it all play out. It’s supposed to give you more control over each encounter, setting up destructive combos using special attacks, but it doesn’t really work as intended. Ordering someone to fire at a target sometimes caused them to let off a single round before standing still. More often than not, I used this mode just to scout out rooms before canceling out of it and manually controlling the action. This tactical mode seems far better suited to mouse and keyboard play on the PC, rather than constantly hitting the – button on the Switch.

Even the audio is a mess on the Switch version (not that it’s an isolated issue, but that’s the version I played for this review). Sound effects blared through my speakers, but all of the spoken dialogue was way too soft; even when cranked up to the max in the options menu. The in-game chatter takes place in storyboard cutscenes, where frozen shots of each character shift in and out to emphasize the speaker, but the dialogue was drastically lower than it was out in the field. Yet somehow the narrative cutscenes were even lower. The quality of the voiceovers are noticeably poor as it is, but unless I was playing in handheld mode I had a difficult time following along without the use of subtitles.

As for Switch-exclusive feedback, the game ran pretty evenly between handheld and TV mode, but both modes suffered framerate issues whenever there was too much going on on-screen. I was surprised by Fear Effect: Sedna’s lack of touch support in handheld mode, particularly in some of the rhythm game and shape-based puzzles.

Overall, I have a hard time recommending this entry to just about anyone — even fans of the original games. It’s just not fun to play in any capacity and both modes of combat feel unpolished and incomplete. Even the stealth approach felt broken, with enemies seeing through objects their cone-of-vision clearly indicated they shouldn’t.

If a game has a story and it’s poorly told or vapid, it needs the gameplay to back it up. And if the gameplay isn’t up to snuff, it’s up to the story to elevate the player’s experience. Unfortunately, Fear Effect: Sedna has neither.

We don’t use a scoring system here at Cheap Boss Attack, so hopefully you found the information above far more informative than some arbitrary number or a sequence of shaded-in star shapes.

A copy of this game was provided for review purposes.

7 thoughts on “[REVIEW] ‘Fear Effect: Sedna’ Drowns in a Sea of Technical Missteps”