What is a ‘Not Quite a Review’? Simply put, it’s a mild critique of a game that I’ve played and haven’t finished. Tons of new games release each and every week and they’re all vying for the most precious of resources: not our money, but our time. I give everything a handful of hours at minimum, which I feel is enough to grab my attention. If it doesn’t, or the game in question requires far more than I’m willing to give, I’m fine discussing my experience as is. It doesn’t necessarily mean that I didn’t like a game, but rather my time and attention have just wandered elsewhere. 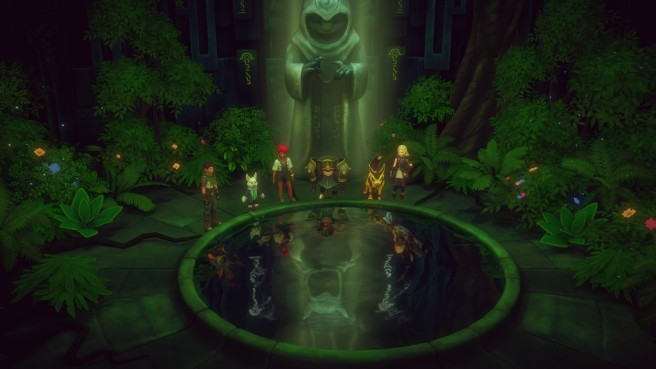 After a successful Kickstarter campaign back in April 2014, Norwegian studio Snowcastle Games released their 90’s JRPG-inspired role-playing game Earthlock: Festival of Magic on the Xbox One in 2016. It was met with fairly average review scores, with even Snowcastle themselves agreeing with many of the criticisms — so much so that they halted the sequel’s development in favor of ironing out the original, then re-released it as a brand new game simply titled Earthlock.

An official blog post went up at the end of December outlining the enhanced edition’s drastic modifications, from a “massively changed” story with more depth, humor, and character to the addition of crafting, side-quests, and minigames. The original version’s cutscenes and character animations are said to have improved as well.

This “Should Have Been Edition” is the version that launched on the Nintendo Switch back on March 8th for $30 USD, but those of you who purchased Festival of Magic on the PS4, Xbox One, or PC can download Earthlock for free when it releases later this month. The update is so substantial that it’ll exist as a separate game, not a simple update to the existing version — save files will not transfer either. As confirmed in the aforementioned blog post, the updated version of Earthlock will not be coming to the Wii U despite Festival of Magic still being sold on the eShop.

These updates do come at a cost, though, as the original game was available for $10 USD (one-third of the price) before being removed from most digital marketplaces.

As someone who never got into the Xbox One version at launch, I’m not in a position to say whether or not Earthlock’s re-release is significantly different, or at least different enough to warrant its $30 USD price on the eShop for those who already own Festival of Magic elsewhere.

I will say that while it’s readily apparent Earthlock was made by a group of developers with a strong emotional attachment to the genre, it’s still just a “fine” role-playing game. That’s not always enough when the game in question requires so much of your time. In the five hours I spent with it, I struggled to care about the characters and their plights and found the combat, while well-designed, to be a mostly exhausting affair. However, Earthlock has a good look to it, a solid foundation, and a downright phenomenal soundtrack that hearkens back to the games that inspired it. For me to put aside the 20-ish hours required to finish Earthlock, I needed a tastier carrot dangling in my face. The Nintendo Switch isn’t shy of options, after all.

Earthlock takes place after a calamitous event halts the planet’s rotation, which left most of its surface uninhabitable. The portion that I played mostly centered around a salvaging thief named Amon, a human raised by his bipedal shark uncle, Benjo. Together they discover an heirloom that allows Amon to control the world’s “amri” (mana), making him quite special. Joining him on his journey is Gnart, a tiny hogbunny scholar that specializes in restorative and support magic; Olia, a female spear-wielder who acts as the group’s tank; along with the young pilot Ive and her magic-casting stormdog companion. While each character is certainly unique, in terms of visuals, combat abilities, and motivations, and the plight of the planet has “sci-fi epic” written all over it, it’s just not presented in a way that kept me interested. If anything, I found myself more confused. Characters launch into blocks of text littered with terms, concepts, and locations that felt natural to them, but not to me. It’s as if I was expected to have an understanding of the lore before diving into the game for the first time. Gnart, the hogbunny, chronicles bits and pieces in his journal, but it’s only from his perspective. An in-game glossary or an improved way to stay informed on current events would have gone a long way, I think. Coming back to Earthlock after just three or four days away, I began to draw blanks.

The combat system at play here is quite good, in theory. It takes traditional turn-based mechanics and spices up the formula by giving each character the ability to switch between two different “stances.” Gnart, for instance, can provide the party with healing magic and deal minimal amounts of damage using his club. His second stance, however, forgoes the ability to heal and attack in favor of buffing the entire party with support spells. Amon, the thief, can use melee attacks and blind enemies in one stance but takes a ranged approach in the other by wielding a grenade launcher (effective against flying monsters).

Switching stances uses up the character’s turn, which is a bit of a bummer. Earthlock is a challenging game with some particularly nasty boss fights, but even basic encounters require a lot of preparation. I found myself missing a lot of standard attacks, so my first order of business became to always buff the group with Gnart’s accuracy spell. Since I was using turns to switch in and out of stances, I needed to ensure the enemy didn’t get too many attacks in a row, so more turns were used to slow them down with Olia or blind them with Amon. I’d get a turn or two to attack, but another would be spent healing, removing debilitations, and switching stances again. What sounded like a neat idea on paper quickly turned into an exhausting battle mechanic that I began to dread more as time went on.

There’s more depth at play, though. Each character has their own skill grid, where new abilities, perks, and stat bonuses are unlocked after each level-up. Leveling up is a bit weird as well since the XP gained from fighting normal groups of monsters is pretty tame. Instead, Earthlock rewards substantial XP bonuses for going into battle against more enemies than you have members in your party. Enemies appear out in the open and give chase once you step into range, but you can lure them into another group before initiating battle with a press of the B button. More enemies equal more turns spent on buffs and debuffs, healing, and attacking, which leads to longer battles, which, again, became more exhausting with each subsequent encounter. One of the new features in this version of the game is Earthlock’s crafting system, which allows you to create potions, ammunition, weapons, armor, and talent grid cards. You’re given a plot of land to plant seeds, which in turn provide endless supplies of crafting materials by simply waiting nearby for ~30 seconds. In the five hours I spent with Earthlock, I never found much use for blacksmithing and hadn’t stumbled across many useful talent grid recipes, so I mainly visited the Farmoury whenever I needed potions or ran low on ammo for Amon’s gun.

The most interesting mechanic comes by way of Earthlock’s pairing system. Two party members can be paired together and their “bond” level will increase over time. Reaching a new bond level unlocks some pretty welcome passive benefits, too. Pairing Amon with Gnart eventually enhances Amon’s basic attack by inflicting enemies with poison, grants immunity to bleed effects, and begins each battle with a regenerative healing spell applied. However, pairing Gnart with Olia, or Olia with Amon, benefits the team in entirely different ways. Landing attacks also fills a secondary meter that, when full, greatly enhances one of the pair’s abilities for one use (Amon’s grenade launcher hitting all available targets, or Gnart’s healing spell being cast on the entire party instead of only one member).

I just wish the battles were a little less tiring. I’d love to see how all of the different pairings, perks, talents, and abilities feel in combat, but I remain mostly uninterested in the in-game world and its characters, and I’m not all too eager to jump back in.

For what it’s worth, Earthlock isn’t a bad game. It’s clearly made with good intentions and a lot of love, and by fans of the genre to boot. The soundtrack is absolutely stellar, and every song could easily be mistaken as one from any Square RPG in the PlayStation era. Even the visuals are charming in a WildStar or Torchlight kind of way. I think it just caters to a very, very specific audience.

Snowcastle Games didn’t do the best job at easing me into the world and giving me reasons to care about it — the same of which can be said about each of the characters. I also found the combat system, no matter how well-designed, to be completely exhausting by hour three. While I applaud some of Earthlock’s hands-off mechanics (pairing), my lack of interest in the story, the world, and the combat ultimately led to my decision to shelve the game in favor of something else.

*a copy of this game was provided by the developer.

11 thoughts on “[NOT QUITE A REVIEW] ‘Earthlock’ is a Fine RPG, But For This Genre, That’s Not Always Good Enough”