Developer 10tons Ltd. has been rabidly supporting the Nintendo Switch, but it’s safe to say that originality isn’t their strong suit. Recently, they’ve put forth a slew of top-down twin-stick shooters in JYDGE, Time Recoil, Neon Chrome, and Crimsonland. And while their latest, most ambitious release Tesla vs. Lovecraft certainly falls into that category as well, it’s an admirable evolution of a genre they’ve been heavily investing in over the last few years.

The story exists purely to push the “science versus fiction” theme, with Tesla showing off a new invention and Lovecraft objecting to the point of being forcefully removed from the building. His Deep Ones begin taking over the city and you, as Tesla, use the power of science and invention to fight against them. 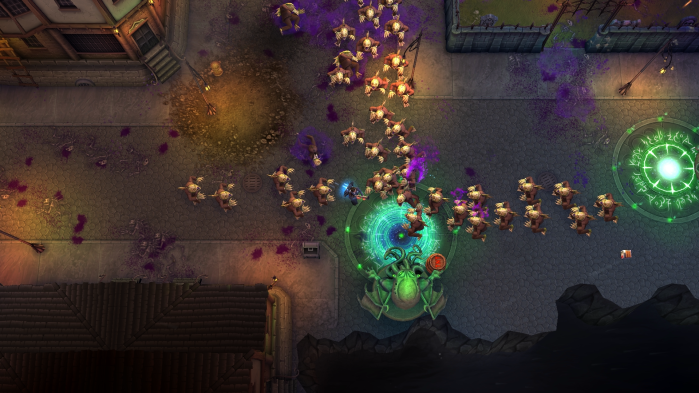 Like I mentioned above, it’s a fast-paced, top-down twin-stick shooter (hyphens!). As Deep Ones spawn from the ground, you’ll move Tesla around with the left analog while aiming with the right. The button mapping is comfortable, with a dash, special ability, and shooting function tied to the shoulder buttons, and a level-up and mech summon function within Y and A.

Aside from the occasional boss fight, most stages are three- to four-minute battles against swarms of monsters that typically end when all of the floating Cthulhu statues have been destroyed. From charging brutes and lesser “fodder” enemies to projectile spamming squidlike beings, there’s an admirable array of baddies to lay waste to while dashing around for dear life. This is meant to be a quick pick-up-and-play arcade shooter and that’s when I had the most fun; especially in handheld mode on the Switch when I only had 10-15 minutes to spare. I always felt like I was accomplishing something since this allotted enough time to shoot my way through 3 or 4 stages.

As you mow down swarms of baddies, Tesla levels up rather quickly. Each level offers a choice between two random perks (like bullet-piercing rounds, dash cooldown reductions, and an increased number of power-up spawns), with more unlocking as the player progresses through the campaign. These perks reset at the start of every stage and are totally random, but they’re all equally meaningful.

Do you choose between being a glass cannon with a ridiculous rate of fire and spreading bullets, or play it safe with dodge cooldowns and the ability to offset oncoming damage? It’s always a tough choice, particularly in the late-game when the difficulty ramps up. Banking heavily on support abilities doesn’t allow you to kill off swarms fast enough before new Deep Ones are summoned, but going all in on damage perks doesn’t provide enough survivability. 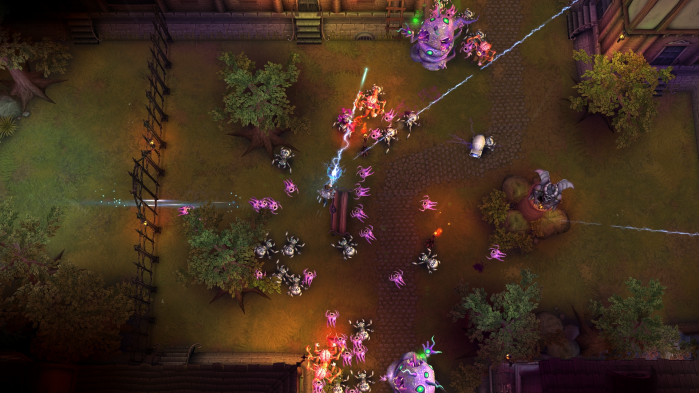 Progression is a major theme in Tesla vs. Lovecraft, with additional weapons, perks, daily quests, and game modes being drip-fed throughout. Some of the weapons feel a bit samey, but there’s a nice variety overall. Since you’re at the mercy of randomization, I was compelled to give everything a shot instead of crossing my fingers in hopes of a few favorites spawning nearby.

What sets Tesla vs. Lovecraft apart from the rest of 10tons’ twin-sticks is a rad new feature that allows the titular hero to summon a rideable mech after collecting a number of “parts” that spawn throughout each level. This mechanical behemoth only lasts for about 10 seconds, but shredding through groups of monsters with its dash ability and double chainguns is super satisfying. You can spawn it at will once enough parts are collected, so I generally saved it for “oh shit!” moments or whenever I picked up XP bonus power-ups.

The presentation and sound are fine, with both playing into the game’s strengths as a short-burst arcade shooter. It’s not ugly by any means, but it’s just pretty enough to feel modern. There are lots of pretty colors and visceral explosions to look at, with very little framerate hitches as a result. Tesla vs. Lovecraft is full of generic metal riffage throughout, but it sets the mood just fine.

Overall, this has been my go-to source for short-burst entertainment over the last week. I was pretty obsessed with 10tons’ Crimsonland back when it launched on the Xbox One a few years ago, but I haven’t been overly wowed by any of their releases since then. I stuck with a few of them for an hour or two before sweeping them under the rug, but Tesla vs. Lovecraft is a whole different beast. I’m consumed by its addictive gameplay loop and drip-feed reward system, and the option to thwart the Deep Ones locally with a friend ensures that it has a permanent home on my Switch for the foreseeable future.

Tesla vs. Lovecraft isn’t only the most remarkable game in 10tons’ arsenal, nor merely the top twin-stick shooter on the Switch, but it’s also among the best games I’ve played so far in 2018. It’s accessible, has a commendable gameplay loop, and (most important) a hell of a lot of fun. Hopefully, it does well for them and we’ll see a role-reversal sequel in the future! I’m dying to take down Tesla’s inventions with Lovecraft’s arsenal of Great Old Ones.

*a copy of this game was provided by the developer.

10 thoughts on “[REVIEW] Use Science to Defeat the Deep Ones in ‘Tesla vs. Lovecraft’”