I began playing and reviewing otome over the last few years and one of the first to really grab my attention was last year’s supernatural samurai tale Hakuoki: Kyoto Winds. You can read all about it here in my review, but the short of it is that I really enjoyed Chizuru’s journey with the Shinsengumi, its wonderful cast, and, having left on quite an open note, I was nevertheless eager to jump into the upcoming conclusion. Enter Edo Blossoms.

Literally translated as “maiden game,” otome are interactive stories featuring female protagonists who often go on life-changing adventures while surrounded by potential suitors. At its core, there are branching story paths swayed by dialogue replies, along with large blocks of text to read along the way. Seldom do otome feature any form of combat or puzzle solving, but instead weave an engrossing narrative around all manner of subjects and themes.

This may not be an immediate selling point to someone in my position (being male) but I’ve found myself enjoying quite a few of them for two reasons — their strong focus on well-written stories and an equally strong focus on character development. If you’re into storytelling, otome (and visual novels, in general) often go unnoticed by the general gaming populace. My favorite genre is the age-old RPG because I love worlds and characters that I can get absorbed in over the course of multiple hours. Here, the combat is gone, but the story is given center stage. With Kyoto Winds, it never mattered that I was put in the shoes of the opposite sex and asked to build relationships with a bunch of pretty samurai boys because, not only is being opposed to that a silly way of thinking, but I was always engrossed in the narrative.

Edo Blossoms is the immediate sequel to last year’s Kyoto Winds, picking up right where we were left off. With that in mind, there is absolutely no reason for you to play this until you’ve finished at least one of Kyoto Winds’ many routes and familiarized yourself with its cast. There is a short prologue chapter that briefly recaps the previous game, but it serves more as a reminder for those of us familiar with it rather than introducing someone entirely new to the series. If you haven’t played Kyoto Winds yet and you’re into otome, I highly recommend it. It’s fantastic and 100% necessary before diving into Edo Blossoms.

With that out of the way, it’s worth mentioning that while both games are visual novels, they’re quite different in their narrative delivery. Kyoto Winds built the world, introduced Chizuru and her journey to find her missing father, and put her under the protection/surveillance of the Shinsengumi (a group of unnaturally strong samurai whose duty it was to protect Kyoto). It unraveled the mystery of the monstrous “furies,” and while it did offer Chizuru a chance at romancing the members of the Shinsengumi, it was far too cryptic in how to go about doing so. Without warning, dialogue choices determined which characters she’d run into and converse with, thus blindly whittling down the available romance pool.

Edo Blossoms is far more traditional, with the player choosing the samurai they’d like to pursue at the very beginning (who, fun fact, are all based on historical figures, like Saito Hajime). The story is then tailored to Chizuru’s relationship with said character and various endings are unlocked based on your dialogue choices. I believe each samurai has 5 different endings to unlock, which (not uncommon to the genre) encourages multiple playthroughs. Once a character’s route is cleared, you can use a “chapter select” mode to speed things up on subsequent playthroughs. For example, it took me approximately 4 hours to reach a true ending, but only 30 minutes to unlock the same character’s “unrequited love” ending via chapter select.

Related: I used this fantastic walkthrough by krystallina to reach various true endings during my time spent with Edo Blossoms.

That being said, Edo Blossoms is considerably shorter than Kyoto Winds, with each “true ending” route lasting between 3-4 hours instead of 5-6. There are 12 characters in all, plus a romanceless route dedicated solely to Chizuru herself, so it’s safe to assume that Edo Blossoms offers more than 40 hours of alternate routes and endings. While 40 hours may seem daunting to some, routes are short enough to enjoy in one or two sessions — it never feels unrewarding and always gives a sense of accomplishment. 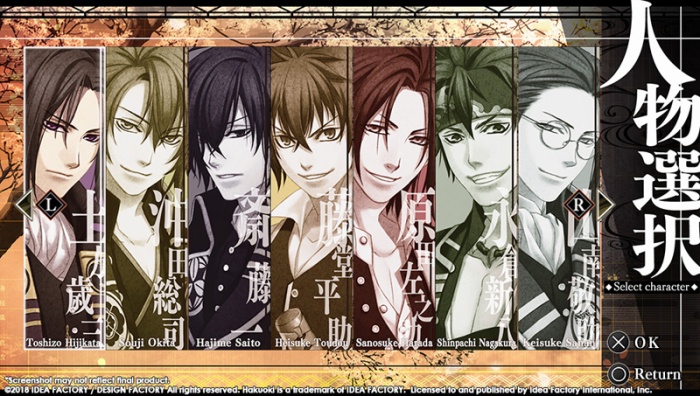 Where Kyoto Winds focused more on laying the foundation of the story, Edo Blossoms is more refined and fast-paced. It weaves together tender moments of character and relationship growth with superbly written action scenes where Chizuru’s samurai companion slashes through hordes of furies hellbent on slaughtering all who oppose them. Edo Blossoms has a few solid plot twists (especially one early on that really set the tone for the rest of the game), but I was mostly in awe of how well the moment-to-moment writing made me feel invested in the next action and romance scene. The music never ceases to perfectly suit the emotion of the text, with lighter notes during more somber moments and pulse-pounding “boss battle”-style tracks during the game’s many battle scenes.

Similar to Kyoto Winds, I appreciate that Idea Factory and Otomate continue to ease in foreign audiences by highlighting unfamiliar terms, names, and places and offer up definitions with a quick press of the d-pad. The Vita’s L and R buttons serve as quick save and load options for those wanting to save-scum their way to true endings, which I happily abused. Another quality-of-life feature I applaud is the ability to rewind text using the left analog stick. After playing for a while, it’s not uncommon for me to “get in the groove” of hitting the X button to advance the text, and sometimes I’d accidentally skip a dialogue box. Flicking up the analog stick pulls up a conversation history that allows you to not only re-read them but even rewind the game back to a specific moment. 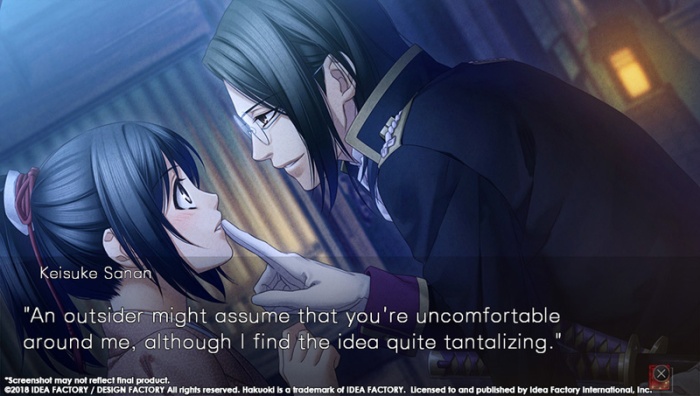 The otome genre certainly caters to a specific audience and visual novels, in general, are often looked at from the outside with the same collective “what constitutes as a video game” groan as something like a walking simulator. However, I firmly believe that there is a lot of enjoyment to be had for those looking to immerse themselves in some truly great stories. If you enjoy reading books, imagine having wonderfully illustrated backdrops and thematically perfect music to further engage your imagination. Not all otome are created equal, though — I’ve definitely played some stinkers.

Of the ones I’ve played, I certainly consider Hakuoki: Kyoto Winds and Edo Blossoms to be the best. For those, like myself, who were already invested in the stage set by Kyoto Winds, Edo Blossoms is an easy sell. However, with it being a direct sequel, it’s imperative that you spend some time with its predecessor before diving in.

With excellent music and backdrops, a vastly improved, refined narrative flow, and plenty of romance and monster slaying, I’m finding very little to complain about.