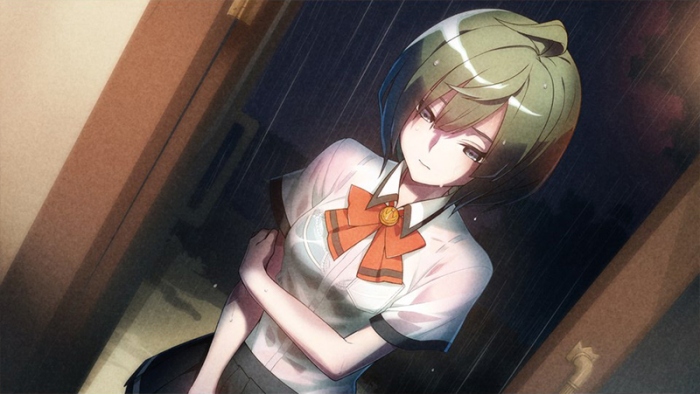 In the small Japanese town of Mihate, a local legend claims that the dead may revive every 100 years as a Yomibito and bring deadly misfortune to those around them. As you arrive as part of a high school relocation, it just so happens to be that wonderful time of the year. Sucks to be you!

You play as a 17-year-old male protagonist who has had it with his miserable life and just wants the world to end. Depression and grief are terrible feelings, right? In an attempt to start over, you move from the big city to Mihate Town, living with a distant cousin in your uncle’s mansion, and are promptly invited to your high school’s Mystery Club. There, you meet weekly with your clubmates and discuss local legends and folklore, all under the tutelage of Mihate Town’s biggest celebrity — your busty teacher and author of the hottest new book, Worldend Syndrome. The book has been so popular that they’re even shooting a movie for it in Mihate Town, much to the dismay of those who enjoy the usual quiet atmosphere.

Worldend Syndrome’s two-hour prologue actually culminates with the “bad ending,” where most of the cast is brutally murdered inside your uncle’s mansion after the August summer break. Once you restart the game, the dialogue choices open up and you’re given the ability to progress through different character paths during the August time period that was initially skipped over before the murders. Thankfully, any text you’ve read before is indicated by colored text and can be sped through using the R1 button.

This game is all about building relationships and seeing how your choices during summer break possibly change the ending to something happier than a mansion full of corpses (I can’t personally think of anything, honestly). There’s your male BFF who is the typical obnoxious pervert, as well as a fledgling writer, a visiting idol, your aforementioned cousin, the daughter of one of Japan’s largest snack making companies, and the quiet, mysterious girl that rounds out the cliches.

Worldend Syndrome is a visual novel where the entirety of the game is spent conversing with these few characters, making dialogue choices, and unlocking various endings along the way. It’s meant to be played through multiple times, not just to see how each relationship plays out, but because the game is a complete and total mindfuck that reveals more of the Yomibito legend with each subsequent route. And, believe me, it’s WEIRD AS HELL. And I loved it.

While each character starts off as a wholly unlikeable turd, their respective routes build them up incredibly well and ultimately lead to one of the most fleshed-out casts of any visual novel I’ve recently played.

However, getting through those routes can often be confusing and lead to many additional replays unless you’re okay with using a guide. After a few fumbles, I used a route walkthrough for the remainder of my playthroughs and REALLY enjoyed how everything played out by the end of the sixth and final route.

Visually, character illustrations feel inconsistent throughout. Each of the major players has a few different storyboard portraits that appear during conversations and most of them are pretty high quality. There were a few noticeable instants, though, when the same character appeared rushed or maybe even drawn by someone else. It’s hard to explain. This is a non-issue maybe 80% of the time, so I wouldn’t worry about it too much. Or, at all, really.

The backdrops are REALLY nice to look at, especially the way they animate certain aspects of the environment to make everything pop. Be it koi swimming in a pond, birds flying along the beach or rivers moving along, it’s a nice touch that admirably adds to the atmosphere of an already engaging narrative.

When all was said and done, I’d spent ~20 hours with Worldend Syndrome completing all of the routes and unlocking each of the endings and there was rarely a dull moment — as long as I was using a walkthrough. There are obvious cues on the in-game map that make it easier to navigate routes on subsequent attempts, but doing so really hindered the pacing and I just found it far more enjoyable watching the story play out.

I know folks were pretty hot on TOYBOX’s previous visual novel, 7’Scarlet, so if murder mysteries, the supernatural, and slice-of-life anime is your jam, then I highly recommend checking out Worldend Syndrome. What began as a game that wasn’t even on my radar has become one of my favorites of 2019 so far. It’s sweet, hilarious, and is rooted just enough in its horror premise, though I do wish it leaned more heavily on the latter. Still, I absolutely adored the narrative and its tremendous character growth. While I always thought I knew what was going on, there was always a red herring getting in the way, and it kept me guessing until the very end.

I’m of the belief that review scores are an antiquated idea and choose to do without them here at Cheap Boss Attack. Hopefully, you found the above review helpful enough to aid you in your decision on whether to purchase the game or not.

Thank you to Arc System Works for providing me with a digital press key that was used for the purpose of this review. Whether or not I pay for a game doesn’t impact my opinion, but these things are worth clarifying.