October is the perfect month to dive into some great horror games, be it playing them yourself or watching a Let’s Play from the comfort of your pillow fort. Halloween is all about the spookies, after all, and I wanted to draw attention to some of my favorite lesser-knowns in the genre to help spread the holiday… cheer? Yay for murder, I guess?

Anyway, this is where Holiday Horrors comes in! These will be short little posts that serve as an introduction of sorts and will hopefully give you a decent idea of what to expect, should you decide to take the plunge for yourself.

Today’s game is unlike anything I’d ever played before. Published by Devolver Digital, Stories Untold is a series of short text adventure games oozing with atmospherical terror and narrative creativity. And the less you know about it, the better.

As Stories Untold begins, you find yourself sitting in front of an old gaming system in a dimly lit room. It’s just you, a small array of family photos, and the glow of a horror-based text adventure game called The House Abandon staring back. Similar to the games of old that inspired it, you read the story text and interact by typing in specific commands (like “open door”). And while a text adventure may not be scary by itself, the room around you reacts to whatever is being displayed on your monitor.

There are four stories in all, tasking you with lab work and manning an isolated station in the middle of a snowstorm, and each has its own unique take on the genre. It’s just one of those games that have you asking yourself “what in the fuck did I just play?” when you’re done, and those are always the best kind. 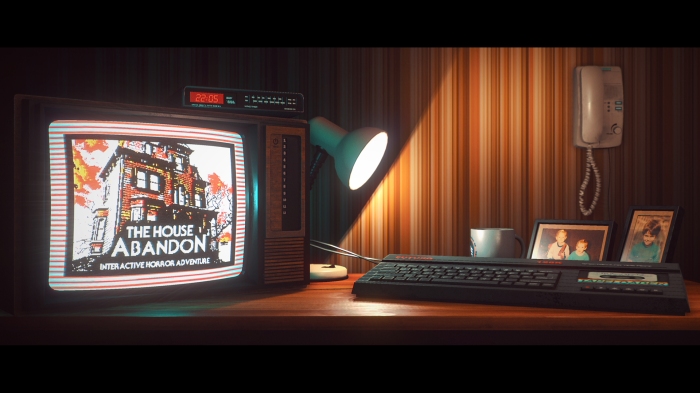 Again, it’s in your best interest to just… not read this anymore. Anything I tell you will just spoil the experience. If you’re curious, just go play it. It’s relatively short, fairly priced at $10 USD on Steam and GOG, and an absolute masterclass in environmental storytelling.

If you’d rather not play it yourself, my favorite YouTuber Cryaotic has an excellent playthrough of all four short stories that I’ll embed below.

Have you played Stories Untold before? If so, what did you think? Whenever someone asks for horror game recommendations, this one is always near the top of my list.