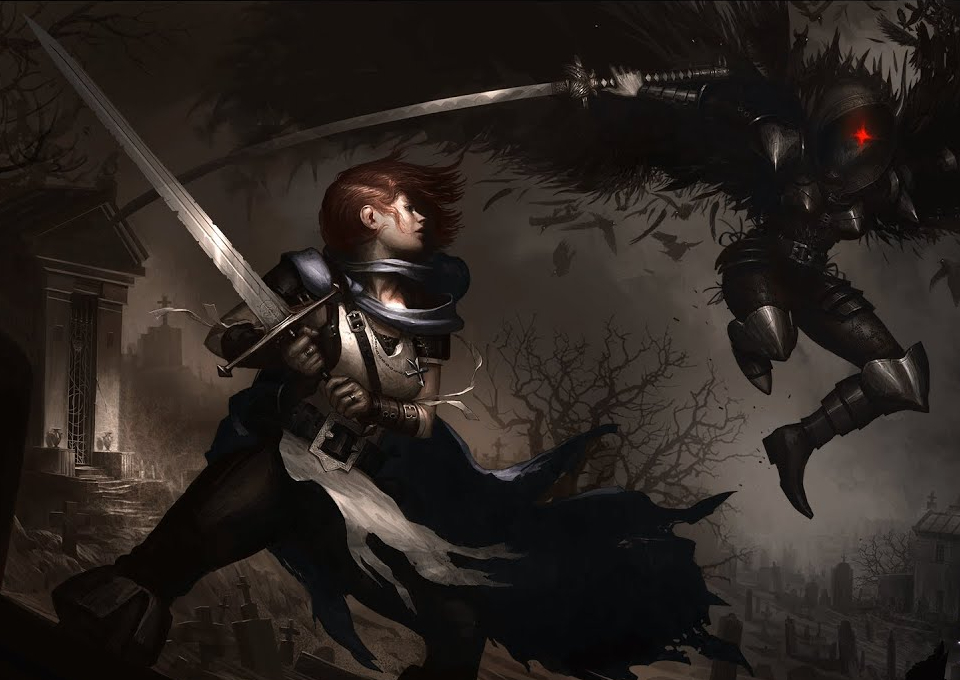 Dark Souls-inspired indie games are a dime a dozen nowadays so it really takes something special for them to stand out. The one I’m playing currently is Hibernian Workshop’s Dark Devotion, which I just picked up on PlayStation during their recent sale for about $8 and I’m having a blast with, despite being shit at these types of games and dying a lot.

At first glace, Dark Devotion is beautifully pixelated and atmospheric as hell, but its “collect weapons and armor while methodically dispatching monsters after pattern recognition sets in” felt all too familiar. There are a small variety of weapon types that vary in speed and damage, armor that dictates your health pool, consumable items that health, restore stamina, and remove debilitating debuffs, with a rounded out combat system consisting of attacking, blocking, and dodging while managing your stamina pool. Dying is also a punishing reward that offers plenty of learning experiences as you make your way back through the same rooms again and again. Sound familiar?

Yeah, I wasn’t super warm on it… and then something clicked. The gameplay loop.

Dark Devotion focuses quite a bit on its loot system, where common weapons, armor, and trinkets routinely drop from fodder enemies, with the rarer stuff seldom appearing in its place. Picking up these rarer items sends its blueprint back to your camp’s blacksmith for later use. When you die in the game you lose all of your weapons, armor, and items and respawn back at basecamp, but said blacksmith will happily craft you any of the goodies you’ve found blueprints for. This allows you to repeat areas with stronger weapons and armor, particularly the ones dropped by bosses, while simultaneously progressing and farming additional blueprints.

So while dying feels crushing (the game is pretty fucking hard, by the way) Dark Devotion always dangles a carrot in your face to entice you into “just one more run.” I dig it. I may have gotten my ass kicked a few times from the same boss, but heading back to their room always meant killing more enemies, collecting currency to unlock permanent upgrades to my character, and potentially finding rad new weapons to make the next attempt a little easier. Fast travel points frequently appear as well so it’s not as if you’re starting from a literal square one with each death. But it’s been beneficial to me to retread an entire zone for loot since common items dropped by enemies are often statistically better than the crafted stuff, which is the game’s way of telling you not to rely on the blacksmith *too* much.

There are branching paths to encourage multiple playthroughs, which is great since this is supposedly much shorter than your average “soulslike.” I’ve heard anywhere from 5-8 hours, maybe even less depending on your skill level, and I’m a little over 2 in myself. I’m somewhere near the beginning of zone two of three and have killed 3 bosses.

So far I’m really digging the visuals and the overall weightiness of the combat mechanics, but what’s really drawing me in is the progression system. It reminds me a lot of why Rogue Legacy was so rewarding. There, you were always discovering new blueprints and collecting gold to improve yourself. In Dark Devotion you’re given a similar incentive but there are no randomized layouts while also offering different combat styles depending on your chosen weapon.

Storywise, it’s whatever. You’re a female templar who enters a mysterious chamber with her squad and gets wrecked by a menacing NPC pretty early on. Afterward, you wake up in the hub world and there hasn’t been much development since. Nearby corpses often have cryptic notes or whatever but I don’t think lore is the game’s selling point.

If you want a 2D game that actually feels like the combat found within Dark Souls (I really hate using that comparison because it’s kinda lazy, but hey, so am I), but with a progression system more akin to Rogue Legacy, then maybe add Dark Devotion to the ol’ wishlist. I’m having a great time with it and even if it becomes a little too brutal for my skill level, I’ve already gotten my $8 USD worth. I think I can see this through, though.